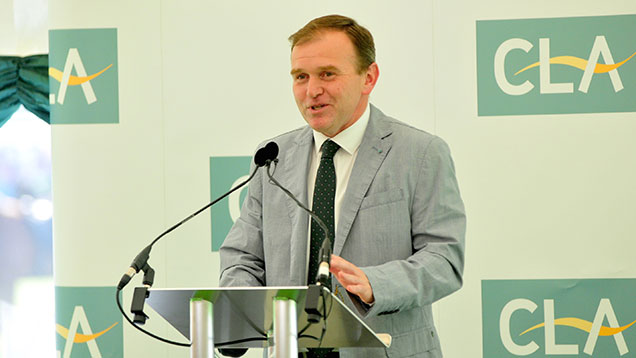 British agriculture would have more powers to drive the industry forward if it stays in the EU and negotiates a better deal, according to farm minister George Eustice.

Speaking at the Devon County Show on Thursday (21 May), Mr Eustice said reforming the UK’s relationship with the EU is a key priority for government.

Echoing these sentiments, Mr Eustice said the renegotiation would offer a perfect opportunity to adopt a lighter touch to regulation.

It should lead to far simpler and less draconian legislation for farmers, he told delegates.

Mr Eustice acknowledged farmers’ apprehension around the referendum, but called for everyone to have more confidence in democracy.

“Being in the EU is already under debate: Let’s have that debate, have the reform, and then take it to the country to decide,” he said.

“This is an opportunity to think through, from first principles, how to have less bureaucracy and fewer rules. I am confident that if we get sensible reform then people will vote to remain in the EU.”

Besides the in/out EU referendum debate, in terms of agricultural policy, the next round of CAP reform negotiations are already getting under way.

“This is an opportunity to think through, from first principles, how to have less bureaucracy and fewer rules. I am confident that if we get sensible reform then people will vote to remain in the EU.”
George Eustice, farm minister

The first round would conclude in 2017, when the UK will hold the rotating presidency of the EU.

This would provide a prime opportunity for the UK to negotiate preferable terms, Mr Eustice said.

“This is a really good opportunity to control CAP reform regardless of the referendum,” said the minister.

“The way that the CAP works is incredibly dysfunctional, so we need to go back to basic principles and design a policy that is fit for purpose.”

Many issues that UK farmers had stemmed from “ludicrous rules” from the EU, with 80% of the UK’s legislation stemming from EU regulations, he added.

“EU rules are incredibly prescriptive and leave very little room for manoeuvre. In the next CAP reform we should have genuine simplification.”

Neil Parish, Conservative MP for Tiverton and Honiton, said he believed the single farm payment was absolutely right for farming and the countryside.

“But what we want is one designed for the UK not for 27 other countries. We need to renegotiate a policy for British agriculture not EU agriculture.”

CLA president Henry Robinson urged ministers to “hold their nerve” and deliver on the strategy for tackling bovine TB, which “must include the roll out of the badger cull”.

Better broadband and mobile phone coverage and helping farmers in England to complete their Basic Payment Scheme on time before the 15 June deadline were other key priorities, Mr Robinson said.