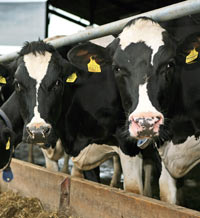 Rural affairs minister Elin Jones said the 281 producers affected in Wales could apply to receive 70% of their 2009 single payments in October rather than December.

“The Welsh Assembly Government has no power to intervene in matters relating to the operation of the milk market,” Ms Jones admitted. “On the other hand, we have some flexibility within the EU rules that allow an advance to be made.

“I have decided to exercise that flexibility, given the specific circumstances, to those milk suppliers in Wales directly affected by the DFoB situation.”

But the minister emphasised that advancing the payment was an exceptional matter, and it was not possible to do the same for any other larger group of producers.

To do so would jeopardise the assembly’s ability to maintain its record of releasing 90% of single payments by the end of the year.

However, she was confident that it was possible to help the small number of producers hit by the co-op’s collapse without delaying making single payments to the majority of eligible applicants.

Farmers would have to meet full single payment scheme conditions, and validation checks on their applications would have to be successfully completed.

Most former DFoB suppliers had secured new supply contracts, though some 20 of them had struggled, mainly as a result of their remote location or relatively low volume output.

The assembly was aware that five producers intended to retire from the milk sector.

Ms Jones also announced that she was working with DairyCo, the national levy board, to jointly fund the new post of Head of Dairy Development for Wales.

The person appointed would be responsible for running a well managed and effective programme providing a range of support, assistance and strategic advice to milk producers.