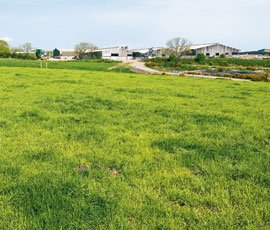 Well-designed modern dairy units are few and far between in today’s market but Astridge Farm near Tenby in Pembrokeshire is a great example.

All of the land is in a ring fence and down to grass, served by good tracks. It has about 113ha (280 acres), most of which can be silaged, with just a small area of steep bank grazing.

The farm has a fully automated 50-point rotary parlour completed in 2005 as part of a complex carefully designed to offer high level of monitoring of individual animals combined with ease of working and handling.

The highly automated system has the scope to handle up to 750 cows, with the farm currently milking more than 400 head at a rolling average yield of about 9,600 litres. The collecting yard, handling race and passages have a flood wash system. The main dairy buildings lie centrally and include three silage pits holding a total of about 6,000t.

“This is a rare opportunity,” said Savills’ Richard Binning, who has set a guide price of £3.25m. “It is a very modern dairy with cutting edge technology. All the work is done – you could walk in and be milking the next day.”

Overlooking Caldey Island, the four-bedroom stone farmhouse is set well away from the main farm buildings and has been recently refurbished to a high standard. There is also a three-bedroom cottage and a stone barn with consent for conversion to an agricultural worker’s dwelling.

An L-shaped courtyard of traditional farm buildings currently used as general stores and the farm office also has permission for conversion to three residential units.

The ground at Astridge Farm is Neath and Brickfield 2 soil series which are well-drained fine loamy soils over rock and slowly permeable fine loamy soils. Valley bottoms surrounding the farm include some old established woodland forming the basis of a wild bird shoot of mainly woodcock.

SFP entitlements will be transferred with the farm sale while the holding’s milk quota of more than 1.4m litres is available by separate negotiation. (Savills 01242 548 020)