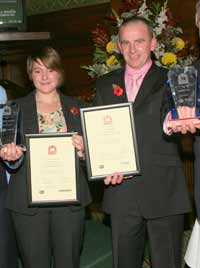 Andrew Hall and Georgina Cherrill are the 2009 winners of the Pfizer Trainee of the Year Awards.


The awards, worth more than £2500, were presented by Defra minister Jim Fitzpatrick at the House of Commons earlier this week (5 November).

Now in its third year, the awards recognise the importance of training in helping UK pig and poultry producers to meet higher welfare and food safety standards in an increasingly competitive market.

Andrew Hall was voted the poultry winner by readers of Poultry World. He began working for PD Hook in its Gunness hatchery, North Lincolnshire, and was deployed on to a poultry breeding farm after a fire closed the hatchery for nine months.

After a period at the firm’s Hatfield broiler breeder unit, he moved to another large 40,000 breeder unit at Susworth.

He completed an NVQ Level 2 in Livestock Production in March and is seeking to further his qualifications in rearing breeders and broilers.

Nathan Raines, academy manager of Poultec Training who supervised Mr Hall described him as a person who grasps an opportunity with both hands.

“He is an excellent example of someone who has the motivation and keenness to push himself to the next level and through training and development to learn the skills required to become a fully competent and important member of the team.

On the pig side, the winner was Georgina Cherrill who works on the Heath breeder unit of Ermine Farms, near Gainsborough.

The judging panel chaired by Richard Longthorp said she had embraced training to contribute more effectively to the unit where she works and to deal with specific problems, resulting in sustained improved performance.

“In addition, she was able to demonstrate the importance of good and well-structured communication within a team of workers and how this contributes to a more effective unit output,” he said.

The award comprises a £2000 training grant payable to the employer and a £500 cash prize for the winning trainee.

Runners up for the poultry category were Tom Neal who works on a Cobb Europe breeding farm in Norfolk and Anthony Plaskett who manages a broiler unit at Billinghay, Lincolnshire for Moy Park.

The pig runners up were Roger Johnston who works at Ballygoney Pigs in Northern Ireland and Richard Battersby who works at LSB Pigs near Kings Lynn, Norfolk.