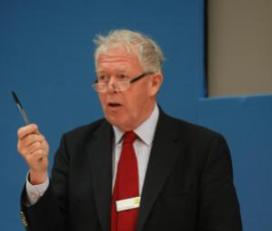 The chairman of Natural England has called on young farmers to adopt a more positive attitude towards farming than their predecessors.

Speaking at the Agriculture and Rural Affairs Committee forum at the Young Farmers AGM in Blackpool on Saturday (7 May), Poul Christensen said the next generation of farmers had a duty to quell the “continuous whinging” in the wider industry and promote the opportunities agriculture had.

“Professor John Beddington talks about the perfect storm of climate change, population growth and the pressure on the environment and commodities,” he told delegates.

“We are all using finite resources and re should be concerned about them running out.

“At the same time we have to provide food for a growing population. It’s an awesome responsibility but it’s an exciting place to be.”

While he admitted the challenges young farmers faced were difficult, he said complaining and expecting other people to tackle their problems for them was not the answer.

“The future is in your hands,” he added. “Don’t go to government and ask for more subsidy, just do it.”

In a breakout session on how to promote British agriculture, Mr Christensen said young farmers ought to lead efforts to promote agriculture as an appealing career to other young people.

“There’s some really sexy kit on farms,” he said. “That should be used to appeal to youngsters who are interested in technology.

“New Zealand’s young farmer of the year competition gets on prime-time television. There’s a real surge in interest in farming, so you should aspire to that sort of level of coverage.

Responding to a discussion on how to promote British produce in supermarkets, Mr Christensen said young farmers should make more effort to develop relationships with retailers.

“You have an opportunity to work with retailers of any size because they are increasingly concerned about supply chains,” he said

“They want to secure supplies, so you have an opportunity to go and tell them your produce is better. When they want a uniform, quality product, show them you can deliver.”

Speaking during the same debate, Ruth Bond, chairwoman of the Women’s Institute, urged young farmers “not to be slow in coming forward”.

“Young farmers are obviously passionate about what they do,” she said. “Don’t miss the opportunity to join with other groups out there like the WI to get help to campaign and tackle the issues that matter to you.”

* Find more pictures, videos and stories on the young farmers agm on our dedicated page.