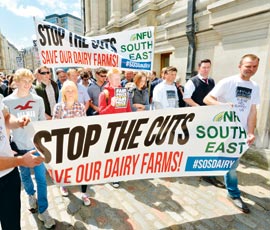 Industry leaders are preparing to turn up the heat on dairy processors that still refuse to sign a code of practice aimed at ensuring fairer milk prices for farmers.

It coincides with the first anniversary of last year’s SOS Dairy campaign, which saw thousands of farmers take to the streets following two milk price drops that left dairy producers facing heavy financial losses and fearing for their livelihoods.

Many milk buyers have since signed up to a voluntary code of practice introduced last autumn between farmers’ representatives and dairy processors. But others have not. There are also accusations that some companies are cherry-picking which parts of the code to implement.

The code was brokered by then farm minister Jim Paice. In an interview this week with Farmers Weekly, Mr Paice said the code had been a success. But “laggard” dairy companies that continued to refuse to implement the code should explain themselves, he added.

“If I was sitting there, I would be saying to them why are you not signing up? What are your reasons for not doing so?
Jim Paice

Mr Paice said: “If I was sitting there, I would be saying to them why are you not signing up? What are your reasons for not doing so? And encouraging them to do so – we mustn’t forget that legislation is still an option.”

NFU dairy representatives are preparing to name the dairy companies that have signed up to the code of practice in full – and, by a process of elimination, those which haven’t. The list will be unveiled in time for next month’s Livestock Event in Birmingham on 3-4 July.

The second day of the Livestock Event coincides with the first anniversary of the farmers’ rally that saw more than 600 dairy producers and their families gather at the Staffordshire showground for a meeting that heralded the start of the SOS Dairy campaign.

Jim Begg, director general of Dairy UK, which represents milk processors, said 85% of buyers had signed up to the code and he expected the number to rise. There had been “huge penetration” but it was always going to be the case that some smaller companies were not going to sign up.

“The most common situation is that they have been talking to farmers and they have decided that the way their pricing arrangements have been set up suits both parties, and so it is almost by agreement that they have not changed things and everyone is quite happy about that.”

Other companies had fewer options compared with bigger companies. But again they were looking at the code. “I have not spoken to any company that has not been looking at [the code], considering it and having discussions about it. It is still very much a live issue.”

Paice hits out over dairy code