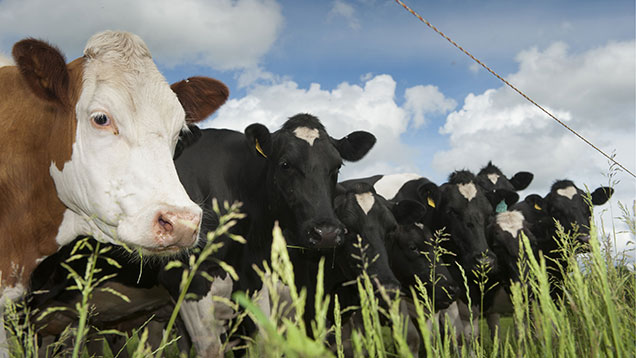 More than half of UK milk producers supply private companies, rather than farmer-owned co-operatives. That means, in most cases, the processor dictates terms and prices.

Plenty of well-established representative groups already push hard for producers. But they lack the legal clout to thrash out contract terms.

To remedy this, the EU brought in dairy producer organisations (DPOs) in 2012, part of a package of laws to help farmers prepare for the looming end of quotas.

These legally constituted groups – which produce more than 6m litres, or contain 10 or more farmers, or both – have an exemption from competition rules, letting them negotiate contracts with a milk buyer on the farmers’ behalf.

That should soon change. The 1,100-strong suppliers’ group Dairy Crest Direct (DCD) is on the brink of becoming the UK’s first DPO.

DCD has been fighting for the interests of Dairy Crest suppliers for 11 years. Among its successes, DCD counts a pioneering formula milk contract, disease prevention schemes and landmark work on dairy futures.

The group’s secretary Michael Masters believes the time could be right, however, to take on the formal status of a DPO.

What is a DPO?

It is a group of at least 10 dairy farmers (or producing 6m litres of milk) who can negotiate contract terms and conditions with a milk buyer or buyers. They must be registered with the RPA, have a specific aim and meet set standards of governance and representation. This exempts them from some competition law.

How’s that different from a co-op?

A co-op takes ownership of the milk, but a DPO simply negotiates the terms and conditions of farmers’ contracts with the processor.

What are the advantages?

This could deliver better milk prices, or at least fairer terms, though it is hard to quantify.

The group can also be a way for farmers to share information and knowledge.

Milk buyers are not obliged to acknowledge DPOs. The value to the whole chain can be hard to see. There are also running costs.

“Dairy is evolving and progressing so fast that having a formal structure that every party can rely on and work with must be beneficial,” he says.

“Some farmers [supplying other companies] have been subject to A and B pricing – hopefully we have been able to alleviate some of that with the relationship we have built [with Dairy Crest], so there are no nasty surprises.”

Farmers pay a subscription to DCD each year, equivalent to the cost of 4 litres/day of milk. This pays the group’s running costs and for elected reps to leave the farm for meetings.

This full independence will be important when the sale of Dairy Crest’s dairies division to rival Muller Wiseman goes through, taking some 700 farmers with it.

“I want us to have a proposition to go to Muller Wiseman that is sound, robust and competition compliant,” Mr Masters says.

“We have got a structure and a relationship with our farmers and we hope some of the Muller farmers may wish to consider that DCD has an offer of interest.”

James Graham, chief executive of the Scottish Agricultural Organisation Society, which promotes co-operation, believes DPOs have not taken off because farmers are wary of upsetting milk buyers and are unsure they can deliver more pence a litre.

But he is certain they have value for all sides, even if it can’t be measured. For example, the DPO could help the processor by passing on milk production forecasts, cutting transport costs and guaranteeing a certain milk quality.

“There is probably not yet sufficient acknowledgement from the dairy companies that this could actually have value for them as well.”

But setting up a formal DPO, registered with the government, takes work.

It also costs money to run and there are no grants available, as there are in the fruit and vegetable sector.

Since DPOs were created, Promar International principal consultant Neil Adams has been heavily involved in explaining to farmers how they work.

He believes the improving milk prices of more than 30p/litre until the recent crash were a barrier to their uptake – as was their name.

“It just sounds like this big European minefield of bureaucracy,” Mr Adams says. However, farmers should simply think about them as “collective bargaining”, a bit like how a trade union negotiates terms with employers, he says.

The UK has DPOs in all but name with professionally run groups such as the Milk Suppliers Association of Lactalis suppliers.

DPOs simply guarantee a level of rigour, by showing they are run with democratic representatives trained in basic contract law with a knowledge of the world dairy industry. It also reassures processors who might have competition concerns.

Mr Adams says this will be increasingly important in future for producers who are not members of big farmer-owned co-ops, as milk prices become more volatile.

As all links in the chain try to reduce risk, contracts could become more complex and farmers could end up selling to more than one buyer.

“I cannot imagine how you would lose out by negotiating terms and conditions; it is just fundamental,” Mr Adams says.