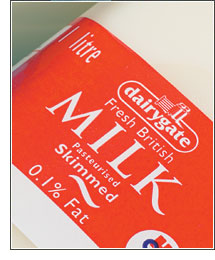 Dairy Farmers of Britain receiver Stephen Oldfield answers your questions on the future of the milk co-op and its suppliers.

Don’t panic and think very carefully before deciding whether to sign up with alternative buyers or stay with the receiver.

I’m encouraging suppliers to sign a purchase order for two weeks to sign to DFB until 17 June.

I have also taken the handcuffs off from existing 12-month contracts so people are free to go, but they need to be careful about where they go or whether they stay.

Because of the difficulties in relation to milk, half of producers had tendered their resignation. Of these, 50% some are still going, but others wanted to put the co-op on notice because they were unhappy with the milk price.

That two-week period will shake the milk field out and I will be able to understand what milk I have got.

Every producer that wishes to continue supplying DFB needs to sign that first 14-day contract.

We will then look at a four-week rolling contract, which will be in place within a few days. Our view is for farmers to decide if they want these contracts by 13 June.

Then either we commit for four weeks on a rolling basis, or I will stop collecting from 18 June.

Situation with DFB is one all about cool heads. I am determined we don’t destabilise the industry by announcing a low minimum price for milk – it’s irresponsible.

We have made sure we have not flooded the market with cheese or speculated on prices. It’s a policy to protect DFB and the milk industry from opportunists.

Many farmers were distressed and confused when the business went into receivership.

Some milk processors have taken advantage and some farmers may have signed deals that they later regret.

We are urging everyone to be responsible. We don’t want a distressed business to lead to a distressed milk price.

The two-week price is on margin-managed basis. It will be the price paid by customers less the cost of getting tanks on farms. I won’t be taking my receivership fee from that part of the business.

For the two-week period people will get a payment on 19 June and the balance by the end of the month.

We are also talking to all the banks to make sure they understand the situation. A number have already called their customers and others have asked their customers to call them if they have cash-flow problems.

Been talking to DEFRA and explained the situation and asked for tangible short-term things they could do to help.

Everyone’s milk collections have continued. I’m not aware that anyone has lost milk.

By Saturday 800 producers had moved to a different place.

If producers are leaving, please can they let DFB know so we don’t have tanks turning up to collect milk.

We had more milk we needed, so a shake-out isn’t impossible to deal with. However suppliers have got to make clear decisions on their liquids business.

We are still supplying milk to Llandyrnog. That business is under offer and we hope to complete as soon as possible.

Part of the deal is the purchaser will offer a good contract of 23.5p/litre for the liquid product in a very wide field – from Manchester to Derbyshire, Staffordshire, mid-Wales and North Wales. That contract will be available by the end of the week, subject to the contract being signed.

Suppliers will have two choices: they can take that price or they can take 22p/litre and the potential purchaser will loan them the milk cheque for Mary at 18p/l.

Suppliers will repay the loan at 1.5p/litre over 12 months.

We are looking to replicate these arrangements with other buyers and allow breathing space for those who haven’t got a home to look at what might happen.

I have asked the member council to work with me to look for opportunities to group members together and seek good deals for them.

I have now shifted my focus on to those who are not in attractive areas or have small volumes. I have had meetings with DEFRA, FRA and NFU to see how we can help those producers whose future isn’t clear.

The receiver’s objective is to sell the business.

Lubborn dairy [sold to Lactalis McLelland on Monday 8 June] didn’t go into receivership because it was a solvent business. Putting it into receivership would have meant significant losses for it and a less certain outcome for the farmers that supply that business.

Dairy businesses in Blaydon, Bridgend and Lincoln are for sale as a whole or in parts and we are talking to interested parties.

The liquids businesses is one of the principal reasons DFoB is in difficulty, so selling that part of the business is going to be more difficult.

However we should have resolved that issue in days, rather than weeks.

It owes more than £100m. The bank has significant debt due to it and will not see all of its money back.

As far as farmers are concerned, they won’t get any money back for money due to milk to 3 June, or any equity.

Of the total business, members will lose the most because of the milk cheque and capital retention. Total loss to farmers will be about £90m. If you add equity in it will exceed £150m.

Bonuses were not paid to execs and directors. The current board of directors has remained in place to carry out their statutory duties.