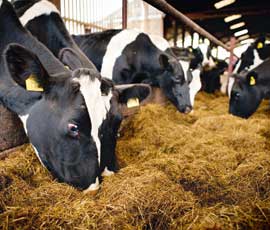 UK farm borrowing rose by 10.5% to a record £13.7bn in the year to March 2013, reflecting increasing cashflow pressure and continuing the trend for double-figure increases seen since the start of this year.

Long-term trends in lending to agriculture contrast sharply with those to wider businesses, pointed out NFU chief economist Phil Bicknell in a recent report to members.

While total lending to businesses of all types has fallen by 21% during the past five years, agriculture has seen borrowing levels increase by 36%.

Base rates have now been at their lowest for more than four years and advisers warn that while no immediate rise is expected, sensitivity to bank rates should be built into budgets, just as it should for other key inputs where changes in costs or income might occur.

Those budgets needed to be drawn up in plenty of time, with realistic figures and a full list of the assumptions used, so those considering borrowing requests could understand what was behind the figures, said Kevin Edwards of the Farm Consultancy Group.

“You have to assume that the person considering an application is not someone who knows the farm. Over-provide information, even if you have been with that bank for some time and the last thing the bank will be able to do is deal with it in a short time,” he said.

There were problems for some tenants looking to increase borrowings where there was no security and in some other cases farmers were being put under intense pressure by requests for further borrowing being met with suggestions that assets should be sold instead, said Mr Edwards.

With pressure for banks to earn more from accounts, it was crucial to meet repayment schedules, because not doing so would open the door for the bank to renegotiate the terms and these could be far more costly than present arrangements, he warned.

“During the past four to five years, there has generally been a switch away from overdrafts towards more structured products, particularly mid/long-term loans,” said Mr Bicknell.

Increased margins on overdrafts were likely to have been a factor, alongside higher annual renewal cost of overdrafts.

Being clear about the amount required and for how long was important for many reasons, including avoiding having to go back and ask for more in a few months’ time, paying additional arrangement fees and undermining the bank’s confidence in your ability to forecast for your business, said Mr Bicknell.

Both he and Mr Edwards stressed the need to build and maintain good communications with lenders.