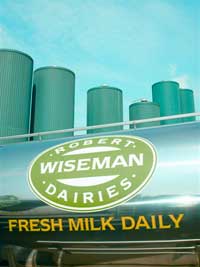 Robert Wiseman Dairies made a record pre-tax profit of £49.2m in the last financial year.

Sales volumes were up by just over 9% to a record 1.77bn litres, with particular gains in sales to The Co-operative Group (an additional 146m litres by this August), and increased volume growth to other customers.

Operating profit increased by 43% to £50.3m. This included an agreed £1.9m reduction in the previously reported regulatory penalty from the Office of Fair Trading.

In addition, in the second half-year the group benefited from volatile cream prices which drove cream revenues above the levels generated in the first half of the year. These increased cream revenues were partially offset by rising plastic and fuel costs.

Chairman Alan Wiseman said the record results were “very satisfactory” and had exceeded previous profit estimates for the year. “It is very pleasing to have the facilities and capacity in place to continue growth towards our near-term target of selling over 2bn litres of milk a year.

“In relation to the improvement in our underlying operating margins, while the Group has recently benefited from higher cream revenues, there is no certainty that these will recur,” he continued.

“In the absence of a reversal in recent increases in plastic and fuel costs, then consideration will need to be given as to how the impact of these cost increases can be mitigated.

“We have made steady progress improving our underlying operating margins in recent years and are committed to continuing this trend.”

Three new appointments have been made at Robert Wiseman Dairies following confirmation that chairman Alan Wiseman is resigning as a director after the company’s annual general meeting in July.

He will remain as an employee of the group to provide a smooth transition for the new management team.

• Work commenced at Bridgwater to increase capacity to 500m litres a year at cost of £10m, with completion expected in November 2010

• Planned expansion of raw milk reload depot at Market Drayton at a cost of £1.5m