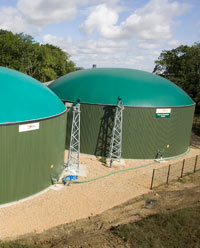 Recent proposed changes to government support for farm-scale anaerobic digestion (AD) are unlikely to provide the boost the sector needs, according to a report by the Royal Agricultural Society of England (RASE).

Its review of anaerobic digestion plants on UK farms suggests AD can play a key role in managing the 90-100m tonnes of slurry produced each year and provide many “green” benefits, but current incentives, planning and regulatory frameworks are hindering uptake.

It suggests the proposed increases to the Feed-in Tariff for small-scale AD and introduction of a Renewable Heat Incentive (see table) will still not give sufficient incentive for farmers to invest in AD, despite the government’s ambitions for it to do so.

“The ‘stick’ of heavy-handed waste rules without a ‘carrot’ by way of incentives, will depress the UK anaerobic digestion industry as farmers find regulations surrounding the installation of plant, use of small quantities of gas-improving feedstocks and use of digestate too complex to negotiate,” the report says.

It highlights a number of key financial and regulatory aspects that need to change and calls on ministers to take these into account when determining future AD strategy.

In general, RASE says incentives need to be increased to make anaerobic digestion at least as attractive as putting up a slurry storage tank. It highlights recent research which suggests that doubling the FiT (from the existing 11.5p/kWh) would give a fourfold increase in viable AD plants, while a capital cost reduction of 40% could increase the number of viable dairy farm projects twenty-fold.

The report calls for:

• Tariffs should not be constrained by supplementary feedstocks used

• Payments within the RHI to reflect total gas volume produced – especially for small-scale AD plants where electricity generation is not practical. Payments should make it economic to use the gas directly

• Possibility of linking incentives to net carbon reduction in the future

The report says access to finance is a barrier for some considering AD, as banks are reluctant to lend money for a technology they are unfamiliar with and wary of.

Some 93% of the digesters surveyed in the report had some form of capital subsidy, either from guaranteed payments for pollution control or from grant funding. “If European and UK government policy is to remove capital grants and subsidies for treating slurry, how else might farmers fund the capital cost of building an AD plant?”

• A new loan system with preferential terms, such as lower interest rates and payment holidays – could be paid for by environmental taxes or by organisations wanting to cut their carbon footprint

•Greater understanding of AD by banks and financial institutions

The nature of anaerobic digestion means a large number of regulatory bodies can be involved, each with its own awareness and attitudes to the technology. There is also a “plethora of growing and changing legislation” which is interpreted and applied differently, the report says. It suggests regulators should:

• Take a “light touch” for systems using low-risk substrates (such as local food waste, veg processing waste, or poultry manure) and for small (micro) AD where energy is used on-farm and there is little imported feedstock

• Take a more “holistic” approach to the management of feedstocks, such as centralised food waste processing and pasteurisation hubs

• Amend planning policy to promote smaller-scale AD on farms and have criteria clearly stating what is acceptable, so there is less ambiguity among planners

The full report, A Review of Anaerobic Digestion Plants on UK Farms – Barriers, Benefits & Case Studies, features a number of farm-based anaerobic digestion examples, such as the one below. The full report can be found at www.rase.org.uk

Clive Pugh is a keen advocate of anaerobic digestion technology having been using it on his 131ha mixed farm near Church Stoke, Montgomery, for more than 20 years.

The first 265cu m digester was commissioned in 1990 to replace a “hole in the ground” slurry store, while a smaller 175cu m digester came on line in 2002. The systems use a variety of feedstocks, including 2500t a year of slurry from 130 dairy and 150 beef cattle housed for half the year, around 150t of chicken manure, 30t of waste silage, used animal bedding, crops grown on the farm, plus £20,000-worth of bought-in substrates.

Gas is used to run a 124kW Combined Heat and Power unit, plus the heating and hot water for two houses using biogas-powered Rayburns. Some 80kWth of recovered CHP heat goes back into the digesters, while he plans to use another 100kWth to heat dairy washings.

Mr Pugh estimates the total cost, including modifications and experimentation, was around £500,000, of which £50,000 was for grid connection. Annual running costs are put at £3,000 a year for CHP maintenance, including filters, oil, spark plugs etc. He suggests costs have been cut by “scrubbing” (cleaning) the gas to improve its quality.

About 3,000t of digestate is produced each year, consisting of 20% fibre, 75% liquid and 5% gas. This is all separated to make spreading easier and more accurate, he says.

“In fertiliser terms, 1,000gals of separated liquid will provide around 30 units of nitrogen, 40 units of potash and 12 units of phosphate, depending upon the feedstock. The quality of our grass is certainly most noticeable, and our need for phosphate and potash is now nil. We only need to top up nitrogen depending upon the type of crops being grown.”

Installation of both plants went relatively smoothly, despite a few teething problems and some issues balancing the load on the CHP. Legislation, planning and lack of clear guidance were the biggest challenges, alongside grid connection, which was expensive and took around four years to obtain, he says. Mr Pugh’s system does not qualify for the Feed-in Tariff and he estimates this is costing around £100 a day in lost income.

But he feels the reduced heating and fertiliser bills, combined with improved slurry and waste management make the system worthwhile. “We find the digester way of farming useful, interesting and rewarding. We would be glad to encourage others to go down the same route,” he says.