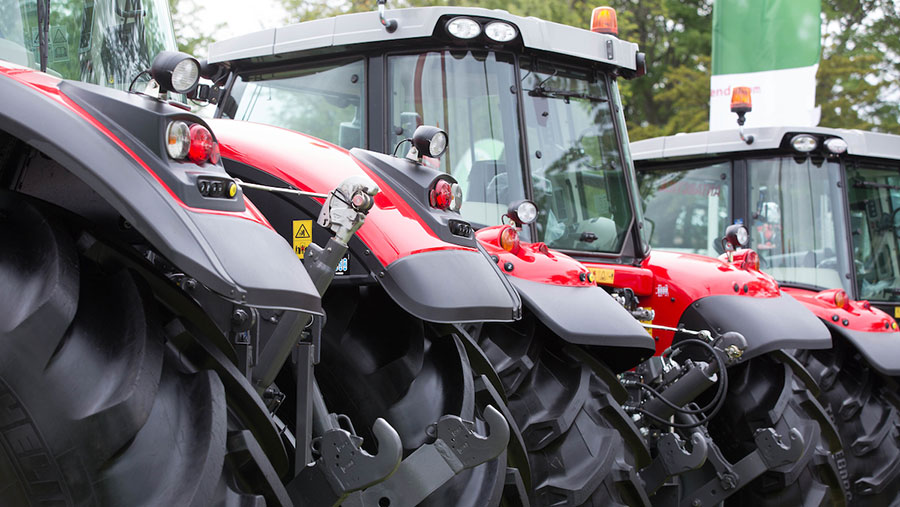 Farmers registered 14% more new tractors in the first half of 2017 than in the same period last year.

At almost 32% up on January-June 2016, the rise was most marked in the eastern counties which accounted for 15% of new registrations.

Growth was also more than 20% in the South West, North West and Wales.

While the 14% UK-wide rise represents a clear increase in investment, it is also the third lowest number of registrations for this period in the past 11 years.

The Agricultural Engineers’ Association, which compiles the figures, said that traditionally the cycle length in tractor sales is about 10 years, with the last annual registrations peak of 9,266 January-June registrations in 2008, so a rise was expected.

Factors behind the larger number of registrations are thought to include an element of catching up after a period which saw little or no investment – 2015 and 2016 saw just 5,970 and 5,382 units registered respectively (January-June).

The expansion of some farming and contracting businesses as others retire and the boost from the higher 2016 BPS payment also contributed.

“We’ve had a few years where things have been pretty tight and people have put off replacing machinery,” said George Chichester, a partner in Strutt & Parker’s farm and estate management department.

The strength of the pound and better commodity prices gave a boost to profits for some farm businesses last year – some in the best position were those who had secured good early fertiliser deals in 2016 and then sold grain late in the season, said Mr Chichester.

At accountant Duncan & Toplis, director Mark Chatterton said the lack of recent investment in 2015 and 2016 was showing up in high repair bills in farm accounts.

Larger farmers and contractors, in particular, were investing because they could afford neither the repair bills not the downtime, he said.

However many smaller businesses also replaced tractors every three years in order to stay up to date and for reliability.

Second-hand machinery values have been pushed up by the fall in the pound since the June 2016 referendum and this has expanded the range of export buyers.

Cambridgeshire auctioneer Cheffins has seen a doubling in the number of on-farm machinery sales in the first half of the year, with sales of this type valued at more than £4m.

“There’s definitely been an increase in the number of farmers looking at other options such as contract farming agreements, bringing forward retirement or selling up,” said Cheffins chairman Bill King.

“While commodity prices have improved, this has been countered by increasing input costs and this, coupled with the increasing costs of new machinery, has had a knock-on effect on the demand for second-hand equipment. We are now seeing intense competitive bidding for the best stock on offer.”

The AEA figures cover only tractors larger than 50hp, with the first half of the year seeing 1.002 million hp registered – an increase of 17% on 2016.

Reflecting the established trend, the average horsepower of 163.1 was 2.9% higher this year than last.

Most horsepower bands saw increases in the number of units registered during the period, with the exception of those between 100 and 120 hp, said the AEA, with the fastest growth in the middle of the power range, between 140 and 200 hp.