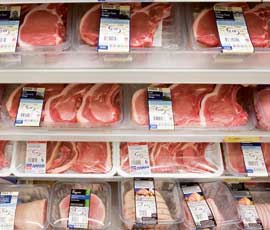 Latest figures from analyst Kantar WorldPanel revealed that beef sales in the four weeks to 23 January dropped by 12%, year-on-year, with lamb sales down by 22%, and pork purchases slipping by 1%.

However, retail sales of beef in both January and December 2010 were unusually high, possibly due to the cold weather, says a report by the Livestock and Meat Commission in Northern Ireland.

“Consumers had just spent December stocking up on beef and perhaps it was only natural for households to compensate for that strong demand with reduced consumption in the following month.” Retail prices rose by 2%, putting total expenditure down by 10%.

“The average retail price of lamb in January was £8/kg – that is clearly causing some consumers to take lamb off the shopping list,” says the LMC report. Only 21% of consumers surveyed purchased lamb this January, compared with 26% in January 2009.