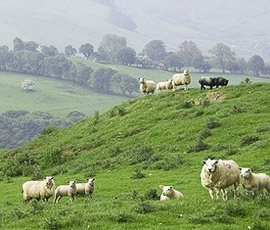 Farmland used for pioneering upland research for more than six decades is to be sold by the Welsh Government this year.

The Assembly Member for Ceredigion had sought written confirmation of the plan after the future of the estate was brought into question.

Ms Jones said she had been told that the land would be sold off “piece by piece around autumn 2012’’.

The public land is currently let to ADAS UK Ltd, who gave notice of its lease, which will end on 26 March 2012, at which point it will be handed back to the Welsh Government.

Ms Jones said it is essential that there is clarity on the sale because of Pwllpeiran’s importance as a substantial research facility.

“I’m disappointed with the Welsh Government’s decision to sell off Pwllpeiran since Wales will lose its only publicly-owned upland research farm,’’ she said.

“All the knowledge gained over the years at the facility is now likely to be lost – this is of particular concern given that public policy requires greater sustainable food production, and this move will certainly be a blow to these efforts in Wales.’’

The AM also expressed her concern about the future of staff currently employed by ADAS at Pwllpeiran.

“I understand that Welsh Government officials have met with them to outline the situation and I will be working over the coming months to ensure that they receive the necessary support during this difficult period,’’ she added.