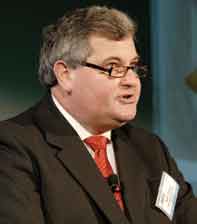 Retailers need to pay their farmer suppliers a fair and sustainable price if they are to secure the diversity of produce their customers are demanding, Waitrose managing director Mark Price told the Sentry Conference at Chilford Hall, Cambridgeshire.

“We know that our customers are going to demand even more and better local and regional food, and we need a diverse supply base to provide that colour and choice,” he said.

“To ensure diversity, you need good returns. Farmers need to make a living wage and that won’t simply come as a cause and effect result of increasing global demand for soft commodities.”

Mr Price explained that the latest DEFRA figures suggested farmers were making an average income of almost £21,000 – less than the national average household income of £30,000.

But there was great variance within the farming sector and, in 2008, the average hill farmer earned just £6000 per for a 56-hour week.

“If retailers don’t offer realistic returns, then pressure for consolidation of growers will increase and control of our food supply could end up in a small number of hands,” he warned.

Mr Price added that the shareholder driven model of doing business was far from perfect. “A single-minded focus on shareholder returns results in an unbalanced system; free trade and consumer power are important, of course, but so is a fair deal for employees, suppliers and the communities in which we trade.”

At Waitrose the emphasis was on joint ownership, with 69,000 employees having a stake in the company.

“Because we’re not driven by the need to deliver short-term gain for external shareholders, we can take the long view in everything we do. All our suppliers are genuine partners within our business and we ensure they get fair returns.”

For example, dairy farmers had benefited from the highest payments in the industry for a decade, he said, resulting in a total investment of nearly £20m. “The cost of this premium has never been passed on to our customers. As a result, investment in our dairy farms now stands at double the national average.”

Mr Price also explained that Waitrose had a strong track record of buying British and he believed that, as the UK was forced to improve self-sufficiency in food production, more retailers will be forced to follow the Waitrose model.

Asked about the need for a supermarket ombudsman, Mr Price said Waitrose had no problem with the concept. But it should offer good value for money and should be sited within the Office of Fair Trading, rather than set up as a costly separate entity.