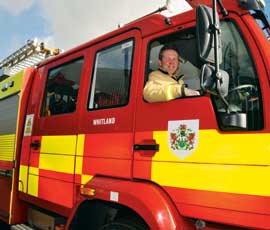 An assortment of well-worn wellington boots in the kit room at a Welsh fire station lends a clue to the profession of more than one-third of its retained crew.

When there’s an emergency that commands assistance from the Whitland firefighters, four of the crew will rush to the station from their nearby farms, discarding their overalls and wellies for fire-resistant uniforms and footwear.

Dairy farmers Adrian Windsor and Huw Scourfield have been retained firemen for 17 years, while Ian Haycocks, another milk producer, joined five years ago. The newest recruit is Rob Kendall, who fits the job around relief milking and running his own sheep enterprise.

The rural location of the station could explain why there are so many farmers among the crew, and there is no doubt their profession is a major benefit to the station. If the pager sounds at milking times then the rest of the crew will respond, while these four are generally available when others are committed to their office jobs.

“If there is a shout when we are milking, the non-farmers among us are mostly able to get to the station as this is either before or after their working day,” explains Adrian, who runs a 100-cow dairy herd and a sheep enterprise within a three-minute drive of the fire station.

The Young Farmers movement was the channel to both Adrian and Huw joining up. Whitland, an unmanned station, had been short of crew for daytime shifts and the watch officer had written to the local YFC to drum up interest. Adrian says signing up was one of the best decisions he has made.

“It is very different to being on the farm. Farming can be a lonely job because you might not see people from one day to the next. I love the team work that goes with being a fireman, especially the banter with the rest of the crew.”

This is very much in evidence when these four farmers are together. There is lots of joking around; important perhaps to counter the difficult situations they often find themselves facing in the line of duty. 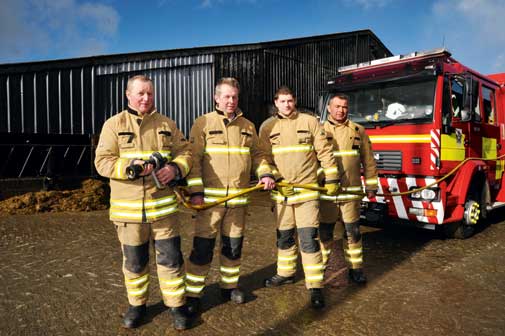 They witness fatalities, mainly in road traffic accidents, but their strategy for dealing with such awful situations is to leave the job behind when it is done. They will often meet up in the pub for some light-hearted chat after a challenging callout. Adrian admits that to some people this might seem an odd reaction, but it’s their way of dealing with it.

“You have to treat it like any other job and switch off when it’s finished otherwise you would go around the bend,” he says. “I think it probably helps being a farmer because we have life and death situations on the farm. You have to approach it like a job.”

The physical nature of farming also gives these recruits a level of fitness that the lends itself to the job.

These days there is much more to being a firefighter than fighting fires; indeed road traffic accidents account for a significant part of the work. A glance at the log of callouts shows that within a two-week period Whitland firefighters tackled a chimney fire, freed a driver from an overturned car and attended a collision between a motorbike and a car.

The men agree that incidents involving children are the worst, but they know that whatever the situation they are there to do a job and don’t get emotionally involved, even when those incidents involve friends, colleagues or neighbours.

“When you live and work in a community it is inevitable you will know the people you go to the aid of,” says Huw. “I don’t think it makes the situation more difficult; if anything it helps the people involved to see a familiar face when they are in what can be a distressing position.”

He produces a letter sent to the station by the widow of a man the crew had been called to help. He had been in the attic of his home when he collapsed and the fire brigade was called to assist the ambulance team. In her letter, his widow expressed her gratitude that there had been familiar voices taking charge of the situation. Most of the men had known her husband.

Not all callouts involve life-threatening scenarios. The men were recently called to a farm to free a cow with her head stuck in a feeder. And there are the occasional hay barn fires, as Adrian knows only too well. He recalls the day he had spent hours controlling a fire that destroyed a barn full of hay at a local dairy farm only to return home to find smoke coming from his own hay. He needed the assistance of the fire brigade to pull out the bales and dampen them.

Fortunately, none of the men has been injured in the line of duty, although Huw recalls an incident which left him stranded in a deep ditch.

“We were called out to soak up a diesel spillage and I slid into a ditch. The others just stood there laughing – none of them would help me out!” Fortunately, he has a sense of humour and agrees that in the more difficult situations he faces, it’s certainly a trait that helps.

An ability to work as part of a team is essential too. “There has to be good teamwork or it just wouldn’t work,” says Huw. “If there is no teamwork there is no trust and in most of the situations we find ourselves in we have got to put our trust in one another.”None of the four regard the actual incidents as a downside of the job. In fact, the only negative aspect as far as they are concerned is the high number of courses they have to attend, particularly those relating to health and safety.

The first two years of joining demand the highest level of commitment because of the intense training. Recruits have to complete courses ranging from learning how to operate apparatus to first aid. It’s not only commitment from the recruits that’s important, but their families too. “They’ve got to be prepared for us rushing off without any warning; it can be a bit stressful,” Adrian admits.

The crew meets once a week for a drill and it’s on that evening that the rota for the following seven days is established. Four firefighters, including a driver, are needed to operate the tender, and the men mark their availability on a timetable on the fire station wall. If the farmers have a TB test or are making silage they don’t put their names down for duty.

Although none of the men became retained firemen for the money, they admit that as times have got tougher in farming it is very welcome. They are paid an annual retainer and are paid per hour for each of the callouts. “The money is important because of the hours we put in – it’s a big commitment,” says Adrian.