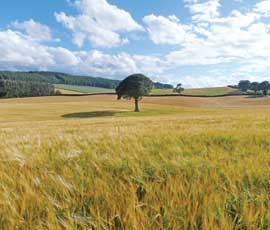 A block of 331 acres (134ha) of productive arable land in Shropshire has come to the market.

Kytes Nest, near the village of Monkhopton, near Bridgnorth, is on the market at £2.5m.

The land is ringfenced with a fertile loamy soil classified at Grade 2.

Currently on a Farm Business Tenancy which expires in September 2016, the land has been farmed to a high standard in an arable rotation but has potential for grazing or grass conservation if required, according to land agent Halls.

The land has good links to the M25 and West Midlands motorway network and is divided into conveniently sized enclosures bordered by hedges served by a hardcored roadway.

The Entry Level Stewardship scheme, which the land is subject to, also expires in 2016.

Entitlements are not included in the sale.

The land also includes woodland consisting of mainly broadleaved plantations. Cawleys Coppice has a compartment of mature oak, which could be felled and replanted subject to necessary felling licences.