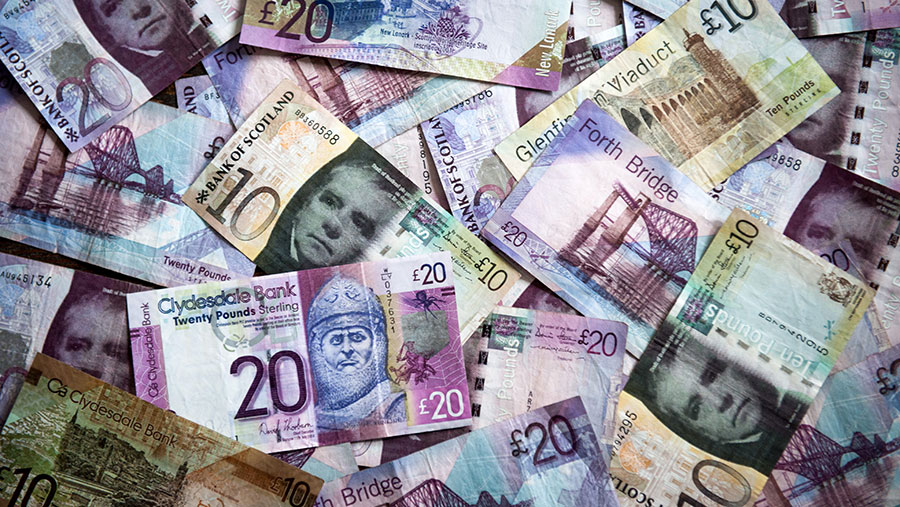 Scotland’s farms have seen a rise in incomes but half still failed to reach a level that would pay family labour the minimum agricultural wage.

The latest figures for the 2016 cropping year were taken from the Scottish government’s Farm Business Survey which audits the accounts of 500 farms.

The data showed 45% of farms had incomes that were too low to cover the legal minimum for unpaid labour, which includes farmers, spouses and business partners.

The survey also revealed the extent to which subsidy payments and diversification ventures shore up farm business incomes (FBI).

And, average losses would have amounted to £21,300 if all other income sources were stripped out and agricultural activities were looked at in isolation.

Off-farm jobs, which are not included in the FBI calculation, were also helping farms to survive and contributed about £14,300 on average, the Scottish government said.

Even though the figures highlighted a difficult situation the survey showed incomes had made a dramatic improvement of 94% compared with the previous year.

“This reverses the decline from the previous year, with incomes recovering to 2014 levels,” a Scottish government spokesman said.

There has been an average increase in farming income across all farms in the survey, the spokesman added.

Despite a steady milk price of about 21p/litre, dairy farms saw the largest rise in incomes, mainly due to a decrease in inputs and a recovery in the value of dairy cattle, the spokesman said.

Meanwhile, farms surveyed that had diversified into ventures such as holiday lets or small wind farms, recorded incomes about £17,400 higher than those relying on agriculture alone.

NFU Scotland chief executive Scott Walker said there were two key messages that should be taken from the figures.

“The first is that 45% of farms in the survey are not able to pay the farmer, spouse and other working family members a rate of pay equal to the minimum agricultural wage,” Mr Walker said.

“The second is that without the financial support payments these farms receive they would make a loss.”

Farm business income (FBI) represents the total income available to cover all unpaid labour and their capital invested in the business, so it has to provide the personal income for those farming in partnership or as sole traders, also any tax payments and provide for reinvestment in the business.

Returns from diversified activities are included in overall FBI.

FBI figures are derived from the results of the Farm Business Survey (previously known as the Farm Accounts Survey).

The data is used to find out about the total income for unpaid labour, such as farmers and their spouses, who rely on the income from the farm.

The survey only collects data from 500 farms that are eligible for subsidies.

It does not include data from small farms or sectors such as pig and poultry farming which do not get additional funding.