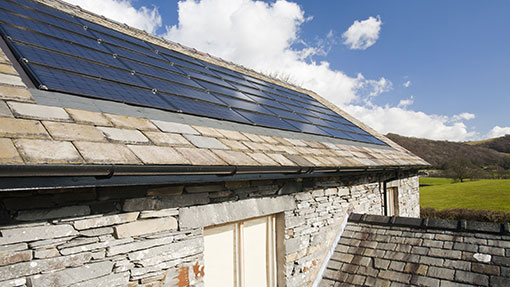 Farmers will be able to install roof-mounted solar panels covering up to 10,000sq m without a full planning application, under new proposals laid out in the government’s Solar PV Strategy.

The strategy proposes a twentyfold increase in the size of roof-mounted solar installations allowed under permitted development rights. This would change the existing solar PV size not needing a planning application from the current 50kW (about 400sq m) to 1MW.

“The NFU strongly supports solar among a wide range of clean energy diversification opportunities, especially where farmers own their own renewable energy assets or otherwise benefit from new income streams.”

An increased focus on large commercial rooftop and large-scale ground-mounted solar installations was proposed by the Department for Energy and Climate Change’s strategy, released last week.

Agriculture was singled out for its “excellent progress” in seizing the opportunity to generate its own energy.

According to unofficial statistics, farmers and growers generate nearly half of Britain’s solar energy, equivalent to same amount of electricity used by households in Birmingham and Coventry. Total UK solar capacity has now reached 4GW.

Further solar industry announcements on maximising the potential of solar farms are expected at the end of April.