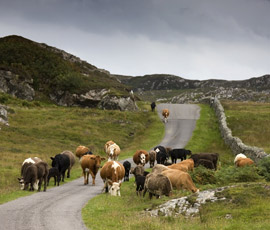 Refuting claims from anti-independence campaigners that food and farming businesses would be damaged if Scotland went it alone, Mr Lochhead said the biggest threat was the UK government’s proposed EU membership referendum in 2017.

“Not only that, there is real concern in many sectors, in particular, the whisky industry, that being outside of Europe will mean losing the backing of the EU’s trade negotiations with countries like India, the US and China.”

Leaving the EU would result in “funding drying up overnight”, without any replacement for direct support payments from the UK government, he claimed.

“I can tell you the Scottish government is quite clear,” said Mr Lochhead.  “Scotland wants to be a part of Europe and with independence it is common sense that we remain part of Europe.”

Between referendum day on 18 September 2014 and ‘Independence Day’ in 2016, Scotland would be negotiating independence whilst part of the UK and within Europe, he said.

“The difficulty is that Scotland’s priorities are not the UK’s priority and it is UK ministers that represent us,” said Mr Lochhead.  “Why else would Owen Paterson mention the EU’s sugar regime time and time again rather than our livestock sector at the current farm negotiations?”

Independence would empower rural Scotland and transform it into a more prosperous, better-connected country with many benefits including faster broadband for all, fairer fuel prices and more influence, said Mr Lochhead.

He accused the Westminster government of denying Scotland’s farmers 1 billion euros of CAP support between 2014 and 2020.

“If Scotland had been independent when the latest CAP budget was being decided, we would have benefited from a rule that – by 2020 – no member state would receive less than an average of 196 euros per hectare in direct payments,” said Mr Lochhead.

“With independence between 2014 and 2020 our farmers would have received an additional 1 billion euros of support. The message is simple, the Westminster system is denying Scotland’s farmers money.”