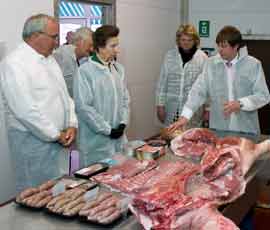 Following many years of slaughterhouse closures, livestock producers in the eastern region were able to celebrate the opening of a new Lincolnshire abattoir on Monday (11 April).

Princess Anne conducted the opening ceremony of Bowman’s Lincolnshire Prime Meat Company plant at Skegness, which was attended by a wide range of livestock suppliers and meat industry customers.

The Skegness abattoir had previously closed in 2009 and after an extensive revamp was reopened for business a year ago.

The business is run by Jon and Lucinda Seagrave and although it is a multi-species abattoir, it concentrates mainly on pigs. After a standing start, throughputs have already risen to around 1,600 head a week.

The company aims to further increase the kill to 2500 a week by spring 2012 and is already looking for additional Farm Assured pig suppliers to meet demand.

The onsite butchers shop has already outgrown its original base and will soon be relocating, selling specialist products including Lincolnshire sausages flavoured with locally-brewed Batemans beer.

The abattoir employs over 40 full and part-time staff.

Princess Anne praised the company for adding value for the local livestock industry in a highly competitive sector during difficult trading times.