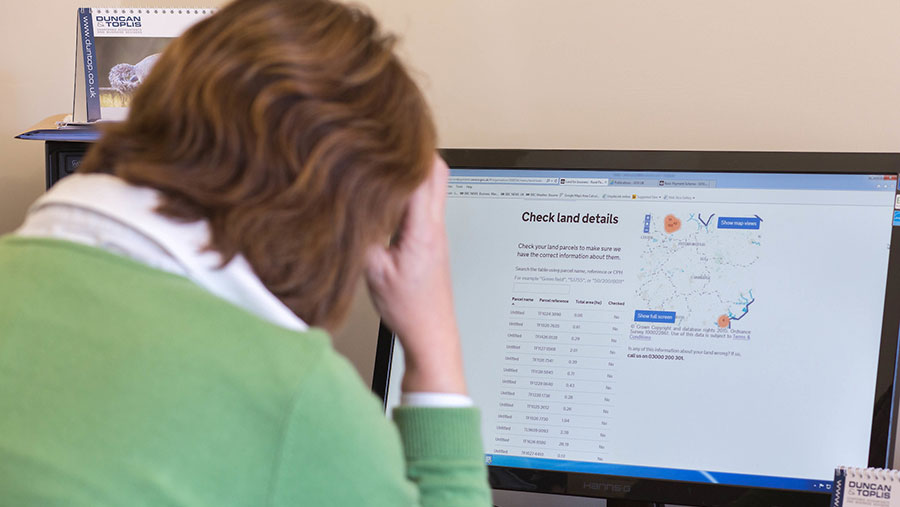 Growers and livestock producers still waiting for last year’s support payments now face the prospect that applications for this year will be delayed too.

The Rural Payments Agency (RPA) – which is yet to make Basic Payment Scheme (BPS) payments to thousands of farmers across England for 2017 – has announced farm mapping problems mean the application window for BPS 2018 will be delayed until mid-March.

BPS applications last year opened on 1 March. But RPA chief executive Paul Caldwell said the window would open later this year so the agency could complete mapping and help ensure applications were accurate.

“This has been a difficult decision – it has not been taken lightly,” Mr Caldwell told an NFU council meeting on Tuesday (30 January) at Stoneleigh Park, Warwickshire.

However, more than one in 10 farmers are still waiting, according to an NFU survey (see “Survey uncovers extent of delays” right) – although the RPA’s own statistics suggests that figure is nearer to one in five.

NFU vice-president Guy Smith said: “When you look at current payment performance and the levels of outstanding issues from previous years you could describe the RPA as ‘just about managing’.

“However, when you add on to that the extra workload caused by the remapping exercise, you worry the creaking cart might start to lose wheels. This is concerning for us – it will be a problem for farm businesses if issues like this snowball due to the delay in sorting them out.”

This week, Defra minister George Eustice blamed the “burden of EU rules” for delays in some of the remaining claims being processed. And he pledged that farmers still waiting for their money at the end of March will be offered a bridging payment of 75% in April.

Mr Caldwell said: “While we are making progress on 2017, my attention is already on 2018 and beyond.

“To achieve the best data accuracy for 2018 applications, I have taken the decision to hold the opening of the window until the middle of March.”

Making sure farmers were able to see the information held by the agency before they submitted a claim was the sensible thing to do, said Mr Caldwell.

It would help remove uncertainty and make the application process simpler once it was under way.

Mr Charles-Jones told RPA chief executive Paul Caldwell he had repeatedly tried to resolve mapping anomalies after one of his fields had “gone missing” from the RPA system – but to no avail. Other mistakes also remained uncorrected, he said.

Land areas had also been incorrectly reclassified, said Mr Charles-Jones. Despite repeatedly emailing and writing to the RPA, it had proved impossible to get the mistakes rectified – and basic payments as well as stewardship payments remain unpaid.

Mr Caldwell conceded the RPA should communicate better with farmers – and said walk-in centres “might be something we could look at”. But he declined to go further.

Leicestershire young farmer Tom Hinch says he will be forced to sell sheep in the coming weeks as he tries to ease cashflow problems caused by BPS payment delays.

Mr Hinch, who built up his 500-head flock from 50 ewes five years ago, said he had still not received his 2016 payment – let alone his payment for 2017. “It’s a very tight time of year and I can’t get any sense out of the RPA at all,” he told Farmers Weekly.

“Together with my young farmer payment, it is worth about £3,500 and without it I will struggle – I will have to sell some sheep to get by until I have lambs again.”

Mr Hinch said he made a simple clerical error on his 2016 application – filling in the parcels of land but not the area he wanted to claim on.

He said he had repeatedly contacted the RPA but they had not helped.