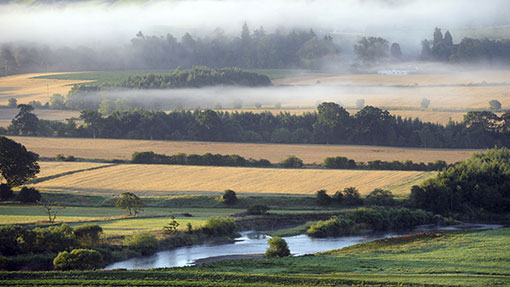 Rural estates make a major economic contribution to the Scottish economy worth several hundred million pounds per year, according to a new study.

The research examined the activities of members of Scottish Land and Estates (SLE), which represents landowners and estates across Scotland.

The study, carried out by Rural Solutions, an independent rural advisory company and Scotland’s Rural College (SRUC), showed that about 65% of private estates are contributing £471m (or £207/ha) to the country’s output.

It also found that an estimated 8,114 full time jobs are linked to SLE members’ estates alone, with more than 2,000 of these jobs being tourism-related.

Data does not exist for a definitive report across all private land but the study covers 1.2 million hectares of Scotland – and was based on the activities of 277 estates ranging from landholdings of less than 100ha to more than 20,000ha.

As the debate over independence, land reform and agricultural tenancy gathers pace in Scotland, SLE, which commissioned the report, said it demonstrated the value of rural estates to the Scottish economy.

It showed landowners were “part of the solution rather than the problem” in the divisive questions of land ownership and management.

Luke Borwick, SLE chairman, told the organisation’s conference in Edinburgh on Wednesday (23 April) that the study brought hard evidence to a debate that was frequently not evidence-based.

“The part we play has never been more important. We’re in the spotlight. The challenges we face with the legislation being proposed in the next six to eight weeks will have an enormous impact on the way we run our businesses,” he told delegates.

“We need to drive home the vital role we play in keeping the economy thriving. The data provides robust information on the sample and membership of SLE, and further work is needed to get a definitive national picture that can inform ongoing debates.”

However, the omens for tenant farming were not good, with respondents indicating that the ongoing Scottish government consultations on both land reform and agricultural tenancy reform were prohibiting them from letting land.

The estates which contributed to the survey provide a total of 1,563 farm tenancies.

But according to Rob Hindle, of Rural Solutions, 47% of respondents reported that political uncertainty was creating barriers and threats to future economic confidence.

And they indicated that they saw a decrease in agricultural tenancies and an increase in income from renewable energy.

“People told us they wanted to let land but were currently treading water. They are waiting to see what happens and aren’t reinvesting in the tenanted sector,” Mr Hindle said.

The Scottish government’s finance secretary, John Swinney, addressed the meeting but refused to be drawn on the outcome of the consultations which are due to report before the Royal Highland Show in June.

He said: “I recognise it’s an issue which raises very strong emotions in Scotland, but we’re involved in a process which is under way.

“There will be consultation and discussion round the detail of any proposals that come forward.”