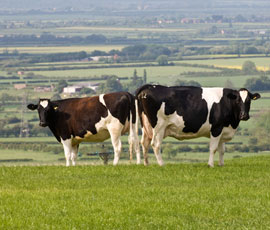 More than 100 angry dairy farmers held a protest over milk price cuts at Asda’s stand at the Royal Welsh Show.

Leading the protest, deputy president of the NFU, Meurig Raymond, told Asda representatives the milk price need to be increased to a minimum of 30p/litre to meet the cost of production.

“A lot of your competitors have come up with extra support. Asda are the last major retailer to step up to the plate,” he said.

On Wednesday (18 July) Asda reversed their milk cut by 2p/litre to ensure their suppliers would get 27.5p/litre from 1 August. But since then both the Co-operative and Morrisons have increased their prices further.

“Every two years we have to go cap in hand for what is really a fundamental right; it is 30p/litre today. That’s the money farmers need to survive,” Mr Raymond added.

Responding to comments, Jim Viggars, head of meat quality at Asda, said he empathised with dairy farmers, but said that supply and demand was dictating the price of milk.

“We’ve got a responsibility first and foremost to you and our customers and they are strapped for cash too. We made a positive step forward last week and decided to pay a 2p/litre premium.”

During the protest farmers were furious that Asda wouldn’t reveal how much profit they made on a litre of milk.

“You know everything about our costs, yet we know nothing about yours,” said Gareth Richards, a dairy farmer from Carmarthen.

Since 2004 the number of farmers within Asda’s dedicated supply group has fallen from 400 to 278.

Chairman of Arla Foods Milk Partnership Jonathan Ovens said this was due to dairy farms expanding production, and reassured protestors that Asda was committed to the future of dairy farming.

But he said other factors also needed to be considered such as bad weather and the knock-on effect of feed prices, as well as the price of cream.

“We have never failed to meet an agreement that benefits both sides and we are confident that a solution will be found over the next few days.”

Visit our dedicated coverage of the Royal Welsh Show

See our coverage of the milk crisis