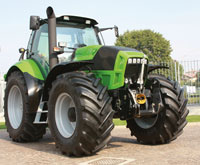 The agreement will draw on Brown & Co’s agricultural consultancy business which serves a broad client base from ten offices stationed throughout the east.

Exclusive to Deutz-Fahr – a previous arrangement with Case has now been cancelled – the agreement will be available to all Brown & Co clients and enables them to benefit financially from the purchase of Deutz-Fahr tractors.

According to SDF UK’s general manager Ken Hamilton, this agreement represents a major development both for Deutz-Fahr and the growing number of Deutz-Fahr dealers now operating in East Anglia and the East Midlands.

“The agreement with Brown & Co will clearly help raise Deutz-Fahr’s profile with key customers in this important arable area,” he says.

“It will also generate new business for our dealers who excel in providing first class after-sales support and trained parts and service engineers.”

Brown & Co founding partner Richard Levin comments: “We are delighted with the new agreement between our company and Same Deutz-Fahr.

“We believe it will forge strong links between our organisations and also offer Brown & Co clients an opportunity to benefit financially through a tractor group purchase scheme.”