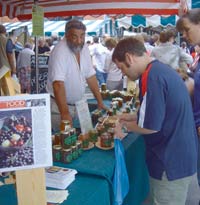 A three-year initiative to boost the number and frequency of farmers’ markets in Scotland has been launched with £217,000 from the Scottish Government and other organisations.

The first meeting of the Scottish Farmers’ Market Partnership (SFMP) this week attracted representation from 30 groups.

It was addressed by the government’s rural affairs secretary, Richard Lochhead, who described the growing network of markets as “an integral part of the government’s work to boost the country’s reputation as a land of food and drink”.

Douglas Watson, the newly appointed director of the SFMP, said key targets included increasing the frequency of markets and experimenting with other locations, particularly in Glasgow and Edinburgh and smaller towns across the country.

“However, the founding principle is producer profitability,” he added. “That guides everything. Markets need to be in the right place, at the right time and they need to be attractive to consumers. We need to serve our customers well.”

The project was welcomed by NFU Scotland‘s chief executive James Withers who said: “There were questions from some as to how the Government’s National Food and Drink Strategy would translate into action on the ground but it has to be said that the SFMP initiative is one of the best examples.”