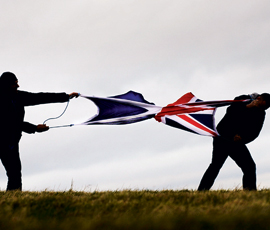 Ahead of next year’s historic vote on Scottish independence, Gemma Mackenzie invited two prominent politicians to argue the cases for and against Scotland going it alone and what that might mean for farmers.

I know you agree with me that rural Scotland has done well from the limited independence brought about by the re-establishment of our national parliament in Edinburgh.

Decisions made in Scotland better reflect Scottish needs and Scottish priorities. So I’m curious why you do not want to complete those powers and prefer to let Westminster run our affairs and represent us in the EU and the world.

When it comes to the critical CAP negotiations, independence is everything. We as MEPs can get the occasional result here and there, but if we are not also represented by a government that shares our priorities then Scotland is just not at the races.

The historic results prove this. Scotland currently suffers the fourth lowest share in Europe of direct payments, and the absolute lowest share of rural development payments. We couldn’t do worse than the UK has done for us and I’m curious why you would seek to defend that record.

The UK simply does not value agriculture in European negotiations. That’s why we have such a low share of both budgets. That’s why UK governments of all political stripes have called for an end to the direct payments which are so vital for the financial security of our farmers.

That’s why the UK government wants to eliminate the coupled payments which are so important for our upland beef sector. I don’t think the UK is a failed state, but independent we’ll be able to continue getting the better results for Scotland our limited independence has already brought.

When it comes to agriculture, devolution offers us the best of both worlds. We have the power to take the big decisions on food safety, food promotion, the environment and the shape of a Scottish CAP.

But crucially, as part of the UK we retain open access to a home market of 63 million consumers, a key building block for growing our food exports, and have a strong voice at the top table in Europe.

But our needs shape the UK’s negotiating position in Brussels. And at the most recent talks, despite Owen Paterson’s views, the UK delivered again on every one of the devolved ministers’ priorities, including an increase in coupled payments and a 2% increase in the total single farm payment (SFP) funding pot. This goes well beyond the “occasional result here or there” you allow.

You claim the UK government is responsible for a poor level of SFP in Scotland. Not true. According to official figures, Scottish farmers on average receive £25,751 per year. This is the second highest SFP in Europe and five times the EU average.

Our farmers receive, on average, £8,000 more per head than their counterparts in England.

We do not know what independence would mean for this vital income. This is one of the reasons that many of the farmers I speak to around Scotland believe that independence is the biggest threat to their businesses at present.

You say devolution gives us the best of both worlds but condemn Scotland to representation by the anti-farming UK government. Dogma blinds you to the UK’s low CAP spend allocation – something which you have criticised in the past but now present as the best there is.

Scotland’s needs don’t figure in UK calculations and successive UK governments have sacrificed the interests of farmers for other priorities – as the recent turnout of the rural development budget showed.

France got itself an extra €1bn, Portugal half that, and Ireland an extra €100m while Scotland’s farmers got hee-haw.

Agriculture comes way down the list for UK governments; ask Jim Paice, farmer and previous UK agriculture minister, who said the priority is and remains the Treasury’s interests.

Worse still, you then pretend that the home market is something other than the EU and that UK supermarkets are somehow doing us a favour by buying our produce.

I’ve more faith in the quality of our produce and the good faith of our farmers. Scotland’s farmers know that the EU is our home market and the UK government, propped up by your party, is putting that in danger. For Scottish agriculture, independence is the best of all possible worlds.

Your assertion that the EU is our home market will come as news to many farmers in Scotland. Two-thirds of all Scottish beef and lamb is sold in the rest of the UK, along with 80% of our pigmeat.

Some of our beef carries a Scottish premium label but a large proportion of our meat products have a British label in these markets.

I share your confidence in our produce but are you seriously suggesting that becoming a foreign exporter in this essential home market would not hurt our industry?

The fact is that this year the UK again delivered all of Scotland’s key CAP priorities after negotiations at the EU. Under current historic payment rules, Scottish farmers enjoy the second highest payments in Europe.

And when it comes to putting farmers first, Nicola Sturgeon made clear during a recent Brussels speech that the SNP’s priority was keeping Scotland’s share of the UK rebate, not increasing rural development funding.

With Alex Salmond now accepting that an independent Scotland would have to negotiate membership of the EU, I know that many Scottish farmers are concerned over what this could mean for essential financial support.

The real question on Europe is what the SNP would be willing to give up to secure Scotland’s seat in Brussels. Care to enlighten us?

In spite of the Lib/Con government’s attempts to jeopardise our EU relations, the EU is still our home market, and it’s in everybody’s interest for it to remain so.

Trade between the Czech and Slovak Republics and between Croatia and Serbia improved after the dissolution of the former states and we can expect the same result within the UK.

It’s not true that the UK delivered on Scotland’s CAP priorities. They would slash Pillar 1 payments, fought against coupled support, and the 7% rate agreed in Council is well short of Scotland’s preferred 15%.

The current Scottish ministers have shown their mettle in EU dealings but are hamstrung by UK negotiating tactics.

Our farmers need their government to improve access to markets, including the European market. Successive UK governments have failed our farmers time and again. We need the full powers of an independent state and we intend to get them.

Given that Croatia and Serbia were involved in a protracted and bloody conflict around the time of their separation I am not sure how relevant an example they provide for Scotland.

And the currency union between the Czech and Slovak Republics fell apart just six weeks after they split.

Yes we need to work to improve access to markets for Scottish farmers. But leaving the UK would separate our industry from a key domestic market that supports thousands of jobs.

On the EU, comments from Flemish MEPs this week show that even your own allies in Brussels don’t believe that you could deliver on promises to maintain the opt-outs that the UK enjoys at present.

Scottish ministers already have all the powers they need to shape agricultural policy. But our farmers get the best of both worlds as part of the UK family.

Feel strongly about Scottish independence? There are lots of ways we can help you share your opinions: