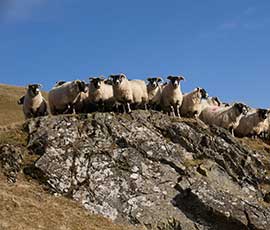 Scottish farmers are pushing for eligibility for the country’s Less Favoured Areas Support Scheme (LFASS) to be related to a base year of 2012, rather than 2009.

NFU Scotland has written to the European Commission seeking clarification on whether the LFASS scheme can be “re-based” to make sure the money is going to those people actively keeping breeding stock in LFA areas.

The delays in agreeing CAP reform means that European rules to redesignate LFAs as Areas of Natural Constraint may not now kick in until 2017, leaving existing LFASS rules to apply until then.

The union is arguing that the delay is good in one way – in that it provides certainty for farmers at a time when single farm payment arrangements are changing. However, it believes too many people are locked out of the scheme because it is linked to stock numbers in 2009.

In a letter to the commission, NFUS president Nigel Miller said: “The present scheme has a historic basis with eligibility being defined by keeping suckler herds or breeding sheep during the 2009 base year.

“That historic gateway to support has recreated anomalies that lock out new entrants from receiving LFASS payments and also excludes farm businesses which operated non-eligible enterprises during 2009 but now keep suckler cows or keep breeding sheep.”

A Scottish Government spokeswoman said work on the design of the new Scottish Rural Development Plan, which includes LFASS, was well under way and it would be consulting on the details later in the year.

“On the issue of farmers being excluded from LFASS, in recent years the Scottish Government has amended the scheme rules specifically to address this issue. This work was carried out in close collaboration with NFUS.

“If there remains a significant number of excluded farmers, then the government would of course want to be aware so that we can consider whether further action is needed.”