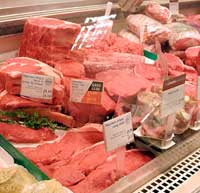 Spot checks are to be carried out on butchers shops and restaurants across Scotland to authenticate beef, lamb and pork sold under the Scotch label.

Trials to determine country of origin have already proved 100% accurate with pork and more than 90% accurate with beef and lamb. The analysis uses tiny bits of meat to identify the composition of isotopes and trace elements, including hydrogen, carbon, oxygen and sulphur.

“The isotope tests may not be accurate enough to identify individual farms, but the unique ‘fingerprint’ the test produces will certainly enable us establish country of origin,” said Andy McGowan, QMS head of industry development.

“This new technology will support our existing paper-based audit and allow us to make unannounced visits to retailers and restaurants to collect samples of meat to verify their source claims are accurate.”

However, he admitted that enforcement might be a problem, with trading standards authorities often unwilling to prosecute.

But new QMS chairman, Jim McLaren, who stood down as president of NFU Scotland in February, said the threat of prosecution might be enough.

“The fact we can use this technology to prove where the meat was produced will be a big deterrent to anyone trying to pass off imported meat as Scotch,” he said.