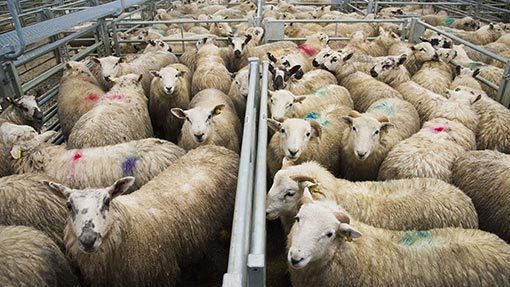 The switch from old-season to new-season lamb has been slow, but as it gains pace prices are easing.

Prices had held up well but were now starting to ease as more new season lambs come to market, with the past few days achieving 10-12p/kg less on the week, said Paul Heyhoe, senior analyst at EBLEX.

However, markets were still seeing the switchover, with a few thousand old-season lambs at market every day.

Bad weather meant that the volume of new-season lambs coming to market was a week or two behind at several northern markets, said Mark Richardson, auctioneer, at Kirkby Stephen market, in Cumbria.

Trade in new-season lambs was buoyant on Tuesday at Kirkby, he said, with demand outstripping supply.

While buyers had mainly switched over to new-season lambs, there were as many old-season lambs at market as new season, with just over 300 in each category.

Competition for new-season lambs was fierce. Prices reached £136.80 (333p/kg) for a Beltex-cross, with many of the best lambs making 300p/kg, said Mr Richardson.

However it was still possible to achieve a good price for good-quality old-season lambs, he said, with the best heavy hoggs reaching £140.

“Buyers are getting more choosy, but good quality can still get a good price.”

He expected numbers of new season lambs to increase dramatically in the next week or two.

Growers could expect this year’s prices to hold up less well than last year’s when a tight supply kept them high until July, said Mr Heyhoe.

However, low sheepmeat imports were lending support to the Great Britain lamb market and the tight export situation in New Zealand was expected to continue for the rest of the year.

UK sheepmeat imports are lower because of the impact of drought in New Zealand, which has a smaller flock, and higher NZ exports to China.