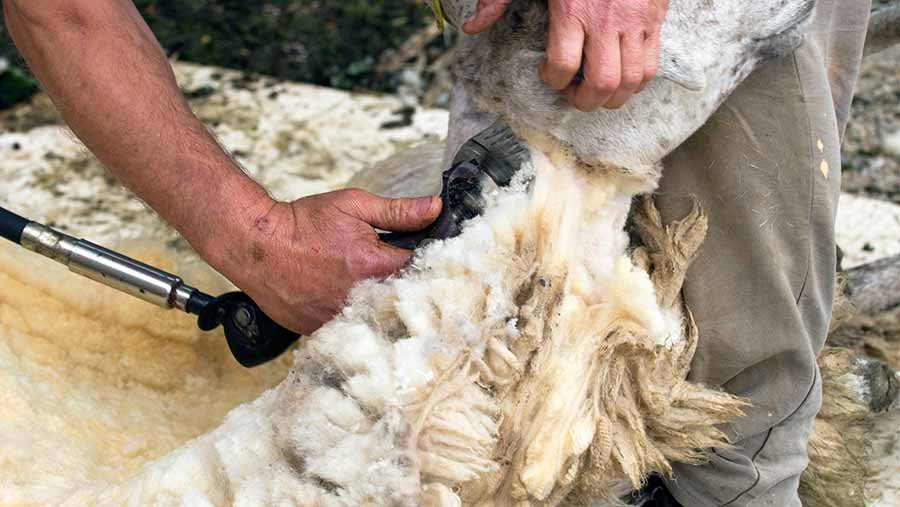 Wool cheques will be smaller this year than in 2015, producers have been warned by the British Wool Marketing Board (BWMB).

Values have been confirmed at between 61p/kg and £1.18p/kg depending on breed, with the coarser wools suffering most (see “Wool clip values” below).

It was a tough global wool market, said chairman Ian Buchanan. Strong sterling for most of the selling season, coupled with a weak New Zealand dollar, had been one of the main causes of the lower returns, he said.

See also: How to prevent and treat blowfly strike in sheep

The BWMB’s forecast for 2016 shows a slight improvement for some breeds, based on sales in January to April this year, when values had stabilised, said a spokesman.

The past six months had seen continued demand for the fine and medium wools as a result of Chinese interest.

Clearance rates at BWMB auction sales over the past few months had been strong and there was still demand for quality British wools, said Mr Buchanan.

“The BWMB’s continuing development of its quality control scheme last spring has helped maintain that demand, providing buyers with assurance of the wool they are buying and allowing them to pass that confidence on to their customers.

“It would be easy to look at the overall average price for all wools, but of greater interest and importance are the individual breed prices. Fine and medium wools such as Texel and Lleyn are expected to average £1.02/kg, with Cheviot wool at £1.20/kg and Romney wool about £1.12/kg.

“The carpet wool market has been tougher, due to tight price boundaries being pushed by retailers and the increasing use of polypropylene,” said Mr Buchanan.

“On the lowest end of the scale we expect Swaledale wool to make in the region of 40p/kg, Blackface an average of 61p/kg and Welsh wool about 45p/kg based on market trends in recent months. Of course, no one wants to see wool prices slipping and that is why the BWMB is investing in new marketing initiatives to drive demand.”

In March 2016, the board, with support from the Campaign for Wool (CfW), launched a trade show for carpets, held in London.

“The UK is still a major market for the use of British wool in carpets. With a difficult retail market in the UK, the show proved timely and successful, with commitments from the manufacturers already for next year’s show,” said said Mr Buchanan.

“Also, at the show the Campaign for Wool launched a new website aimed at supplying consumer information about wool products and a search facility to highlight wool retailers in a particular area. Although only launched at the end of March, early indications are good and it is being supported by the carpet manufacturers.”