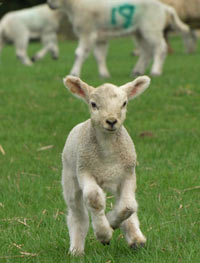 Auctioneers say new season lamb trade has got off to a reasonable start, despite the usual seasonal dip in prices as supplies pick up.

Elwyn Davies from Ashford Market in Kent said 1500 new season lambs averaged around £2/kg at Tuesday’s (25 May) sale, with the best Continental types fetching a 20-25p/kg premium. “There’s quite a range in prices, from the big premiums for well-fleshed lambs to under-finished ones which are nearer 190p/kg.”

In Carlisle, prices were about 10p/kg down on last week at an average of £2.02/kg, according to Robert Addison. New season trade was about two to three weeks behind normal due to the long winter and lack of decent grazing, he said.

Old season supplies had all-but finished, although the few that were traded averaged 170p/kg.

Further north in Scotland, old season hogg trade was still going, although demand had fallen as more meat processors started to switch to new season supplies, Brian Ross from Lanark Market said. Hogg prices at this week’s sale fell in response, averaging 155-160p/kg, up to 170-175p/kg for the best.

He was cautiously optimistic that future prices would hold up, provided the euro didn’t weaken further. “If the euro weakens, we could be in a bit of trouble though.

“One thing is for sure, there will be a lot less sheep about in Scotland this year because we lost so many in the bad winter,” he added. “This could help prices, but it’s a question of whether people will be willing to pay.”