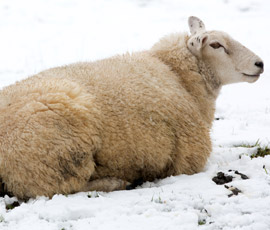 Scottish farmers who lost livestock during the snowstorms in spring and successfully applied for aid are set to receive compensation payments “within weeks”, according to the Scottish government.

Following a meeting of the Scottish government’s Weather Aid Group on Tuesday (20 August), details of the compensation package have been revealed.

Scotland’s rural affairs minister Richard Lochhead announced a £6m Weather Aid scheme in May, which included an extra £250,000 of funds for the fallen stock scheme.

According to the government, 854 out of the 1,063 requests for funding met the eligibility criteria agreed by the group.

The scheme will support successful claimants with de minimus payments up to £6,000 per business. But under EU rules, farmers who are able to demonstrate they suffered a drop in income of 30% or more will be eligible for higher levels of support.

He added: “We still have some final checks to carry out and during early September will be contacting those farmers who were not able to provide data that can be verified. This will allow the completion of all payments.”

NFU Scotland president Nigel Miller said the funding would provide a welcome boost for farmers, especially those struggling to pay off overdrafts and bills.

He added: “The compensation under the EU scheme will allow those with 30% losses to get a more proportionate support package. The farms that it does help are in a bad place.”