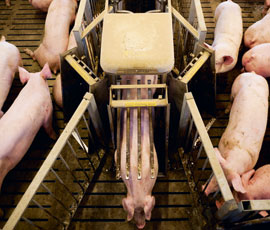 Although the GB euro spec Deadweight Adjusted Pig Price (DAPP) only rose by 1.35p to 142.97p/kg, spot bacon quotes continue to surge ahead and on Friday (6 May) averaged circa 155p/kg.

Weekly spot prices announced by the four main contract abattoirs also improved, with Woodheads leading the field with a significant 4p/kg rise to 152p/kg deadweight, Cranswick was up 2p to 147.5p/kg and Tulip and Vion also put on 2p to stand at 147p/kg.

The seven-day value of the euro has eased slightly, closing last Friday worth 88.32p and reports of large volumes of European pigmeat now coming out of Private Storage Aid (PSA) may also help to temporarily fill the gap left by reducing pig numbers.

UK cull sow quotes have also levelled out, with export abattoirs in some cases trimming their prices by up to 2p/kg and most delivered quotes between 108-110p/kg.

A slight reduction in forward LIFFE feed wheat futures prices, which eased by around £6/t at the end of the week, may also help to boost weaner prices, which remain affected by high finishing costs, but the latest 30kg ex-farm Agriculture and Horticulture Development Board (AHDB) weaner average has remained static to £43.75 a head.

Although a further spell of dry weather will play havoc with arable yields, it will at least be good news on the barbeque front, where pigmeat remains a menu favourite.