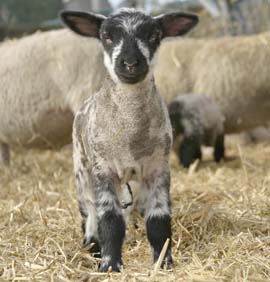 New season lamb trade has got off to a strong start as producers look to capitalise on record market prices.

The flush of spring lambs has taken the edge off new season prices slightly, but at an average of over 553p/kg deadweight in the week ending 7 May, prices were still about 70p/kg above the same time last year. On a liveweight basis, EBLEX‘s new season lambs SQQ average for GB was around 275p/kg by mid-week, about 50p/kg higher than the old season price.

“Even though year-on-year new season lamb throughputs are up, there’s not a lot of old season lamb about and supplies are tight generally, which is helping keep prices up,” AHDB senior analyst Mark Topliff said. “We may see better rearing percentages and lower mortality rates this season [due to settled weather over lambing], but even taking that into account, supplies are still relatively tight.”

Somerset auctioneer Paul Ashton from Greenslade Taylor Hunt sold 2,200 new season lambs at two sales earlier this week, at an average of 274p/kg lwt. “Normally trade dips at this time of the year, but we were actually about 10p/kg up on the week and 50p/kg above this time last year.”

He suggested farmers were selling lambs at lighter weights than normal on the back of the firm prices and concerns over limited grazing and high feed costs. “We’re certainly seeing more 36-37kg lambs than normal.”

Elwyn Davies from Hobbs Parker in Kent reported similarly strong trade with “unprecedented” prices due to buoyant demand from home and export markets. New season lambs were averaging about 50p/kg more than last year. Tuesday’s sale averaged 270p/kg as several major abattoirs moved to new season lambs as hogget numbers reduced, he said. There was a range of weights and quality on offer, from lean lightweight lambs to heavy well-fleshed sorts, he noted.

“There is no doubt the liveweight prices being achieved in markets are dragging up deadstock prices,” Philip Walton of Longtown market in Cumbria added. “We are selling strongly into France and overall we are seeing record prices for lambs. Good ewes are also achieving over £100 a head.”

Mr Topliff said the rise in domestic prices had halved the UK’s discount to French prices, from about 90p/kg dwt last year to nearer 44p/kg. “We’re still competitive though because sheep supply is tight in all main European markets and there isn’t the quantity of New Zealand lamb either. Prices have been rising elsewhere too.”

But he acknowledged the exchange rate would have a big impact on future export trade. “For now at least, sterling is relatively weak, which helps exports, but we need to keep an eye on it.”