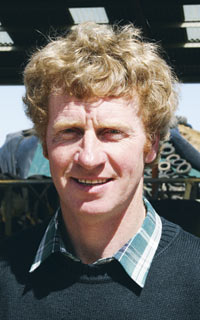 Rising from 80 cows 10 years ago with the plan to be milking 1000 cows within the next 18 months is the goal of Cumbrian farmer Mike Bowes.

But despite his large scale operation at Chalk Lodge Farm, Dalston, he still manages to achieve high standards of welfare through building design and his approach to herd management.

The herd size already stands at about 750 cows with two-thirds of them housed in two new sheds whose design epitomise the ethos of this business. The sheds, divided by a central feed access area, are each 275ft x 80ft and both contain cubicles for 250 cows. Apart from the large 8ft cubicles and wide passageways – providing cows with an ideal environment – these sheds are totally open sided.

“Even in the worst weather we’ve never had any drop in milk yield. The cows are healthier and happier in this sort of open environment,” says Mr Bowe.

His refreshing approach to large-scale herd management has been nurtured through the advice and support he’s received from Genus’ Stuart MacLennan and Richard Gordon and Promar consultant Paul Henderson. Mr Bowes’ insight into the sustainable management of a four-figure herd was also instigated by tours of large scale units in Italy and north America.

But while expansion is considered by many as a necessary means of survival, it isn’t always the issue of capital investment required that proves to be a stumbling block to increasing milk output. Staffing is critical and is something Mr Bowe believes is fundamental to profitable management of a large dairy herd. 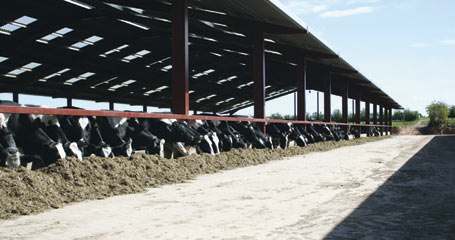 Despite plans to expand the herd from 750 to 1000 cows the new open-sided buildings provide a better environment, maximising cow welfare.

“Staff here have their own area of responsibility. There’ll soon be a specific protocol for every member of staff that they’ll follow rigidly. We’ve got a good and reliable team of four herdsman, two milkers and a tractor driver – and we’ll need another two staff in the future.

“The working environment for the staff – as well as the cows – has to be right to ensure they can consistently deliver the highest level of management,” says Mr Bowe.

Mr Henderson says the cost of good staffing should never be a hurdle to expansion: “Any one contemplating expansion must ensure there’s a system of staff training in place so the workforce can achieve the standards you demand.

“Forage, fertility and staff – get those elements of management right and you’ve got the basis for profitable milk production.”

In 2003 Chalk Lodge restocked, but a three-year plan was drawn up to expand to 300 cows by 2005. That was superseded with a move to increase to 500 milkers by 2008 and invest in a new parlour and housing. But in 2008 an updated target was set for 1000 cows on the farm and that meant further investment in the two cubicle houses for 500 cows and a 7000t silage clamp.

“Milk price has never affected decisions to invest because we are determined to stay in milk. We wanted to create a high welfare unit, but at the same time expand under a precise cost structure. It’s taking us longer to get where we want to be, but expansion costs have never gone over budget,” says Mr Bowe.

With most of the infrastructure in place the management input will now focus on improving cow performance. Currently the herd is split with late lactation cows going out to grass, but higher yielders staying inside. The TMR diet comprises grass silage, whole crop, ‘725″>’Vitagold, a blend and straw. A decision has yet to be made about whether to house the cows all year round. Average yield is 7200kg at 4% fat and 3.2% protein, but within two years the target is set at 8500-9000kg.

The herd is milked through a 20:40 swing-over Alfa Laval parlour that will be increased by 10 points. It takes two men 3.5 hours to milk 500 cows.

Cow comfort has been the basis of all his building and cubicle designs. The open-fronted sheds have ample feed space for cows and roomy 8ft long cubicles with a 50in high neck rail to give maximum lunging area and are also fitted with mattresses.

“Compared with big units I’ve seen abroad which were airy sheds with open sides, we’ve been keeping our cows in matchboxes in the UK for too long. So I wanted to create an environment to reduce stress and health problems and help cows be at their most profitable,” says Mr Bowe.