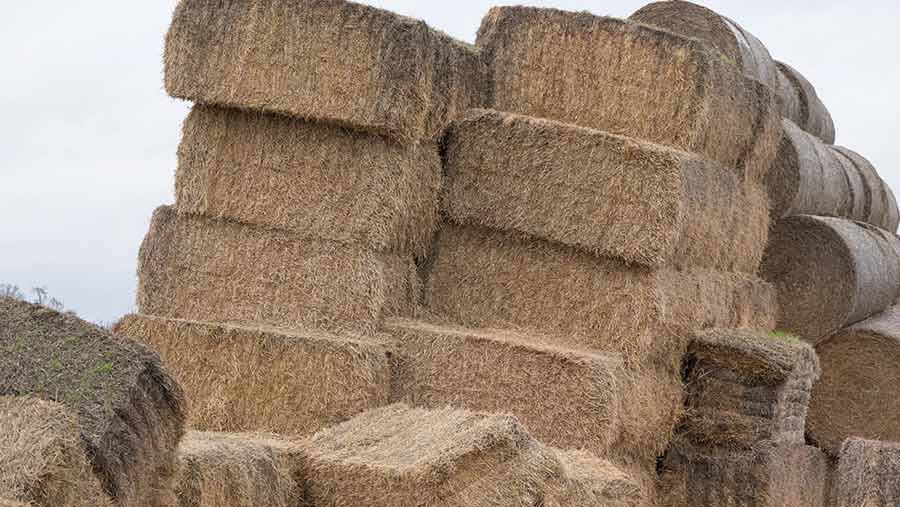 Tight supplies have driven straw prices higher in recent weeks, with the best samples topping £130/t at auction in a number of regions.

According to the latest figures from the British Hay and Straw Merchants’ Association (BHSMA), big square bales of barley straw are fetching at least £90/t in most regions of the UK.

Prices are highest in the south-west of England and south Wales, where prices were averaging £100/t in the week ending 18 February.

Values are lowest in the south-east of England, where demand is more muted.

The latest averages are up about £5/t on the prices published by the BHSMA a month ago and are more than double what farmers were paying for straw a year ago.

However, figures published by the auction marts reveal how much more than the regional averages the best-quality samples are selling for at auction.

Tayler & Fletcher said the average price of barley straw sold at its sale at Stow-on-the-Wold in Gloucestershire on 9 February was £117/t, with a minimum price of £110/t and a maximum of £125/t. Wheat straw averaged £100/t.

Cheshire-based Wright Marshall said it saw a top price of £132/t for a 20t load of barley feed straw at its weekly sale at Beeston Castle mart on 15 February.

John Read, associate partner with Carter Jonas, said the company had seen strong prices and 100% clearance of the 1,700t of hay, wheat and barley straw on offer at its sale at Newbury in Berkshire in late January.

“The fact there was a 100% clearance shows the strength of demand this season,” he said.

“This will only continue if there is a late spring and turnout is delayed.”

James Wotton, auctioneer at Sedgemoor Auction Centre in Somerset, said demand had been very strong at their latest sale on 17 February.

But he predicted that trade could be much quieter at their next sale in March. “I think we could see demand down a lot,” he said.

“Demand was on fire at times over the weekend because people knew exactly what they needed to get them through until spring. In a month’s time, I think it will be very different.”