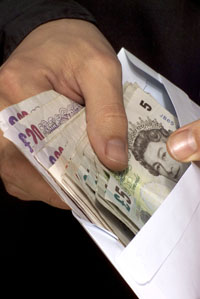 Farmers Weekly has reported how farmers facing late single farm payments are being advised to register with a stress helpline to speed up their claims. It’s a subject that FW contributor Charlie Flindt has direct experience of – here’s his column, which will appear in the magazine on 18 February.

I confess that up until very recently, I knew very little of the Farm Crisis Network (FCN). I’d heard of them, of course, but their world and mine had never collided before.

But about a month ago, I was trying to sort out the cesspit outflow pipes with the farm drain rods when my mobile phone rang. Lifting the phone carefully out of my pocket with my icky rubber gloves, I saw the bank manager’s number displayed.

Now, I guessed that the call was either a celebratory one to say that the SFP had finally made it out of the labyrinthine depths of the RPA computer and arrived in my account, or was another shirty call because we’d gone over the limit again. Being the eternal optimist, I assumed it was the former, and so removed the gloves and answered it.

It was neither celebratory nor shirty; in fact, she was ringing with a very useful SFP-related idea. Had I tried ringing the Farm Crisis Network?

Of course not, I replied. They are for crises: foot-and-mouth, flooding or tragic deaths – not for some mediocre barley baron like me whose SFP hadn’t arrived.

She was adamant, pointing out that this was the second year in a row that mine hadn’t arrived properly. “And how many red bills have you got sitting on your desk?”

I pointed out that we gave up opening envelopes some weeks ago – we hide them in the desk.

Hmm. Yes, we’d had a justifiably snotty one from the National Trust, whose patience was beginning to wear thin – and I can’t say I blame them.

So I had a bit of a wash down, went and found the FCN number, and gave them a ring. Being a typical Englishman, I tend to go all guilty about making a fuss, and half expected to be told to go away and stop wasting their time.

But their reaction was considerate and sympathetic, as they listened to my predicament. There were no comments of “Well, why did you buy a new combine last year?” or snide remarks about “subsidy-soaked farmers”. They simply took my details and said they’d ring me back.

Within days they called back to say they’d had a word with the RPA, and that someone from that poor beleaguered organisation would be calling me to discuss my case. Sure enough someone called Liz did call me, and instead of the usual “Your case is undergoing entitlement correction and we can’t comment further” line that I’ve been hearing robot-like for 18 months, she promised a high-percentage “manual override” payment within a couple of weeks. And that’s exactly what happened. The next call I had from the bank manager was indeed celebratory, and we could at last dig out the cheque book.

So some thanks are due – in Oscar-winning style. First, I’d like to thank not only the big boys like Frontier, Masstock, Agrovista, and Yara, but also the smaller businesses like Romsey Ag Machinery and my next-door neighbours for their patience when waiting for long-overdue cheques. Special mention must go to the National Trust’s credit department for their incredible tolerance.

But most of all, a huge thank-you goes to the team at the Farm Crisis Network. I’m not sure how they did it, what strings they pulled or how dramatically they presented my case, but I’m incredibly, pathetically grateful.

What do you think about the situation with stress and single farm payments? Have your say on our website forums.