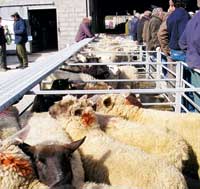 Tuesday’s (15 February) sale revealed an improved trade in hoggets, with average prices about 5p/kg up on the week. Some 700 head went under the hammer, achieving a top price of 203.08p/kg liveweight. “We had particularly strong trade for super-light and light lambs, which averaged 179.85p/kg and 174.36p/kg, respectively,” said auctioneer Andrew Thomas.

“We had more numbers forward and were lucky to have reasonably good quality.” Medium weights settled at 186.59p/kg, with heavy types at 178.48p/kg. “Over the past two weeks trade has really improved – January prices were 10-15p/kg below last year, but a steady improvement has narrowed that gap.”