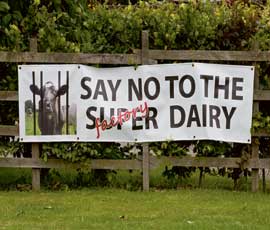 One of the dairy farmers behind plans for Britain’s first “super dairy” faces three pollution charges.

Peter Willes, director of Nocton Dairies, is due to appear before Barnstaple magistrates court on 12 April.

The charges date back to back to February 2010. A previous hearing on Wednesday (2 March) was adjourned.

Mr Willes is accused of depositing, knowingly causing or knowingly permitting the deposit of controlled waste on land without an environmental permit.