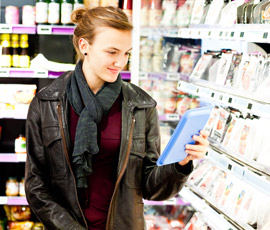 Supermarkets are stlll failing to give adequate support to English farmers and the rural economy, according to a survey by the Campaign to Protect Rural England (CPRE).

The late and exceptionally cold spring following last year’s washout summer has been piling the pressure on farmers who are battling for fairer prices for their produce.

As a result, the CPRE asked the seven leading food retailers to demonstrate how they were supporting farmers, local food producers and the management of the countryside.

Despite some welcome initiatives, the survey found that supermarkets could easily do much more to help farmers the countryside, said Ian Woodhurst, CPRE’s senior food and farming campaigner.

“Supermarkets dominate the grocery sector and our food chain. Given this, they need to use their immense market power to support the nation’s farmers, the countryside they manage, and boost sales of local food,” he added.

The survey revealed “concerns” about supermarkets, which the CPRE would like them to address:

Mr Woodhurst urged supermarkets to take a more “joined-up” approach to farming, local food and our countryside so that consumers can buy high-quality food, knowing that farmers have been paid a fair price, while maintaining the beauty of the English countryside.

“The horsemeat scandal has shown what can happen to the food chain if there is a race to the bottom on price,” he added. “The same lessons need to be learned to secure a better future for farming and the countryside, as well as to boost local food economies.”

“Retailers source the vast majority of products like milk, butter, eggs, carrots, potatoes and beef here in the UK and our members give clear country of origin on both fresh meat and processed meat products so that consumers can choose to buy British if that’s what they want.”

Retailers were meeting consumer demand, but ultimately, not all consumers were interested in local produce, he said.

“Farm prices are influenced by more than just retailers, as we have seen recently in wheat prices, but retailers pay a fair price to farmers and have pioneered supply chain agreements in milk and other areas,” he added.

“There are, of course also support payments for farmers from the common agricultural policy to ensure the maintenance of the countryside.”