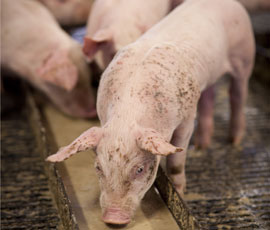 The gap between the latest Deadweight Adjusted Pig Price, which rose to 147.85p/kg in week ended 6 January, and weekly contract prices which fell by 2p/kg over the same period, continues to widen.

Contract base prices published by the five main abattoirs for this week are now as follows:

Poor retail demand coupled with a falling euro and extra pigs held back over the Christmas/ New Year period has also meant that supply is tending to outstrip demand with the result that spot prices also fell in sympathy.

Spot bacon was generally traded within a fairly narrow 138-140p/kg range with lighter weights earning a premium of 4-6p above this.

Despite reports of falling European pigmeat prices cull sow prices have held firm and in some sectors bids of 1-2p more than last week were available with most quotes in the 114-116p/kg range and small premiums available for larger loads or where numbers were short.

The value of the euro remains a key factor as far as pigmeat imports and exports are concerned and has continued to weaken closing on Friday (6 January) worth 82.5p compared with 83.5p a week ago.

The weaner market is also continuing to improve reflecting better prospects for finished pig prices in the months ahead with the Agricultural and Horticultural Development Board 30kg ex-farm weaner average now standing at £44.59/head and significant £3-5 premiums available for Freedom Food standard 7kg and 30kg weaners.

Cereal prices also staged a modest rally last week with futures prices on the LIFFE market quoted at £150.75/t for January rising to £152.00/t for May.