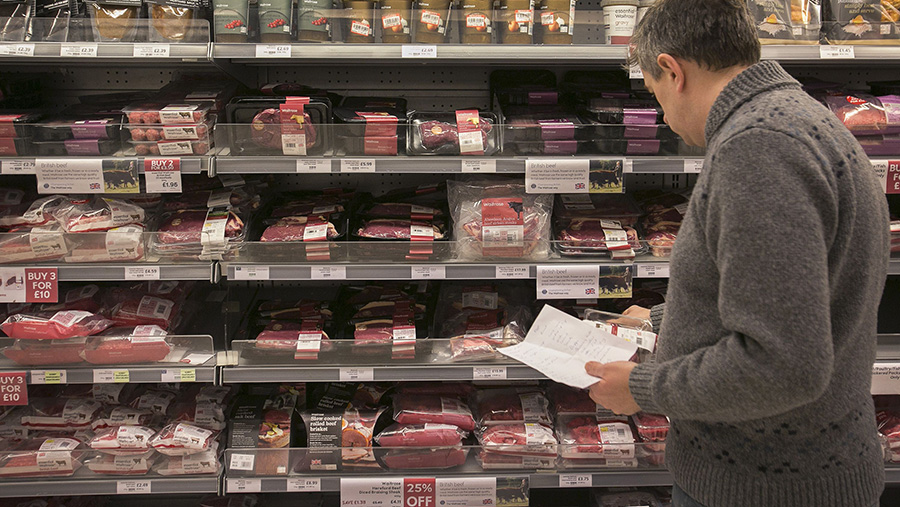 A snapshot of supermarkets in Scotland has shown that most retailers are supporting British producers but Tesco and Asda still have some way to go, say farming leaders.

The pork shelf watch, carried out by pig producers in nine different supermarket chains and 20 stores, comes at a time when Scottish prices have plunged to an eight year low.

Prices have dropped steadily from a record high in November 2013.

The SPP deadweight pig price was 112.3p/kg in the week ending 20 February, compared with 134.0p/kg in the same week last year, and in the past year are down 20-25p/kg deadweight, representing a decrease of about 17%.

They found Tesco and Asda were both offering significant quantities of European pork over British and Scottish produce.

In the Irvine, North Ayrshire, Tesco store, out of a total of 81 packs of fresh pork, 58 were British or Scottish, but 23 were of EU origin.

In Asda’s Huntly, Aberdeenshire, store, 20 out of 65 fresh pork packs were British, seven were German, 25 were German/Polish, five were French and eight were Dutch.

Products were also commingled in these stores, meaning it was difficult for consumers to identify and support domestically produced pork when located alongside imported meat.

However, producers found Aldi and Lidl to be the strongest supporter of domestic fresh pork with the vast majority originating from Scotland.

Strong support for the domestic pig industry was also seen in Marks & Spencer and Waitrose where 100% of fresh pork and bacon was British.

UK-only displays of pork were also evident in the Sainsbury’s, Morrisons and Co-operative Food stores visited.

Kevin Gilbert, NFU Scotland pigs working group chairman, said farmers were working hard in challenging conditions and producing to the highest welfare and quality standards but it was vital the produced was valued across the supply chain.

“We know that consumers want to buy locally produced sustainable food and the continued commingling of produce makes it difficult for them to identify pork which originates here, in Scotland.”

Mr Gilbert added that retailers could do more to sell British bacon.

“While the Dutch and Danish lead the bacon offering in the majority of our retailers, the good work being done in Waitrose and Marks & Spencer shows that a stronger commitment to home-produced bacon is easily achievable.”