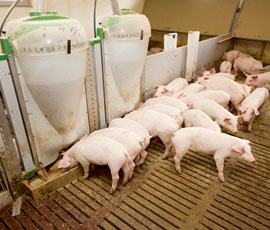 Pig prices and prospects are improving, but with a gap of more than 26p/kg between cost of production and selling price, many are still struggling to survive.

BPEX estimates cost of production this month at 164p/kg against a GB Deadweight Average Pigs Price (DAPP) of 137.67p/kg on 2 April.

This puts losses at more than £20 a finished pig and restructuring has moved up a gear, with equipment sale numbers rising. Pig consultant and auctioneer Peter Crichton predicts producers of up to 20% of UK pigs could quit the industry over the next 12 to 15 months.

“We’ve got to see some really significant rises, not just in the DAPP, but weekly contract prices too,” said Mr Crichton. “If it’s only going to go up by 1p a week, we need 30 weeks of price increases, and we can’t afford the autumn price slide.”

He confirmed sow culling rates were rising and there were also signs that clean pig slaughter weights were falling, with cashflow pressure likely to be a contributing factor.

Pressure from banks was key in the decision of many, but not all, producers quitting pigs, said Mr Crichton. Banks were reviewing the quality of loan books at the same time as many producers were seeking to extend overdrafts or loans.

Some producers are tackling the feed cost crisis by going down the “less is more” route. “They might be able to reduce staff, keep slightly fewer sows and do the job better, maybe finishing at heavier weights. An unproductive sow will eat just as much as a good sow, and you can’t afford to feed them if they are only going to produce seven pigs a litter.”

Weaner producers were less affected than others at the start of the feed price hike, but were now severely damaged, said Mr Crichton. Producers operating farrowing-to-finishing systems were possibly best placed to survive.

Those with Freedom Foods status and/or other good contracts were realising a higher-than-average price, as were those currently selling pigs on the spot market, said Mr Crichton, who has several pig equipment dispersal sales booked over the next few weeks, compared with just one last year and one in 2009.

A recent BPEX Market Trends and Outlook report by Mr Park highlights many positive factors in the pig market:

• EU pigmeat exports of more than 2.7m tonnes to third countries in 2010 – these markets continue to expand

• UK competitiveness with pork from other EU origins has improved