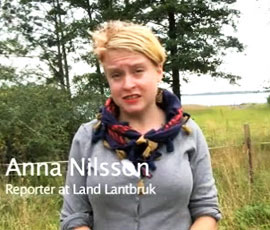 Swedish dairy farmers have been involved in crisis talks with Arla following a series of milk price cuts which have taken farm gate prices well below cost of production.

Arla, which processes about 70% of Swedish milk, has slashed the price paid to farmers five times this year, blaming a reduction in world market prices.

Erik Pettersson of the Swedish Dairy Association said the average price paid to the 5,000 dairy farmers in the country now sat at about 25p/litre, while cost of production was hitting the 29p/litre mark.

The average price charged on the retail shelf is 76p/litre.

Dairy producer Jan-Christer Carlsson, told Farmers Weekly at the 2012 IFAJ Congress in Sweden, that his milk price had been reduced by Arla from 32p/litre in January to below 27p/litres today. This compared to the 37p/litre he had been paid in 1987.

“If the price does not increase by the end of the year, I think there will be a drop in the number of milk producer in Sweden,” he said. “I am surviving, but if this goes on for a long time, I will need to think of options.”

Theis Brøgger from Arla said in a co-op such as Arla, there was no “secret funds” and they couldn’t increase price if they couldn’t generate returns from the market.

However, he anticipated that towards the end of the year market prices would start to go up and in that case, the price paid to farmers could increase.

Commenting on the crisis, the Swedish minister of rural affairs, Eskil Erlandsson said dairy markets would always fluctuate and sometimes the processor needed to suffer, rather than take it out on the farmer.

“In Sweden most processors are farmer cooperatives, so the farmer has the possibility to reverse the situation,” he said.

As a result, any changes in the market should be farmer led. “It is not my preference to regulate,” he said.

Watch the video on how UK advisors are affecting retail and farmgate milk prices in Australia and more about the Swedish milk and pig crisis.