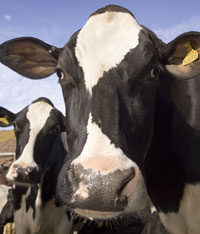 Milk prices, green energy and dairying abroad were some of the topics up for discussion at last week’s Semex ‘Changing Channels’ Conference.

Attracting delegates from across the UK, the conference had an upbeat positive atmosphere, despite recent milk price cuts.

The Institute of Grocery Distribution’s Joanne-Denny-Finch encouraged producers to take advantage of the recession by using grants and new technologies.

Green energy win, win for all

Investing in new technologies regarding renewable energy is the way MP Jim Paice believes dairy farmers should be heading, with agriculture able to make a significant contribution to the UK’s energy security.

“The potential for biogas produced by anaerobic digestion to reduce reliance on fossil fuels is enormous, with biogas as a general replacement of natural gas presenting a more efficient option.”

With more than 4000 anaerobic digestion facilities in Germany, they have already taken the first steps toward providing a “biogas feed in law” allowing anaerobic digesters to feed biogas into the natural gas network.

“This is the kind of bold measure the UK needs to emulate if this kind of renewable energy is to be allowed to thrive,” he said.

“AD plants offer massive potential not only is it another income for farmers, it is a means to deal with on-farm waste, reduces methane emissions from agriculture, produces bio-fertiliser as a byproduct and provides greater energy security,” said Mr Paice.

Farming in Ireland, New Zealand and the USA, Thomas Clinton is well positioned to comment on the global profitability of milk. With 400 cows in Ireland producing 36,080 litres of milk, two herds totalling 2300 cows in the USA averaging 35,200 litres and four herds in New Zealand averaging 33,250 litres, some wonder why he left Ireland to invest abroad.

Mr Clinton said expensive land prices and quota were two of the main reasons which led him to invest elsewhere. “Farming in New Zealand and the USA happened by chance. The USA involvement was accidental, as a friend needed equity and then by chance I found myself in New Zealand advising a neighbour on purchasing a farm and with no intention of purchasing myself.”

Realising export refunds and intervention would eventually disappear within the EU and the unavailability of the right size farm in Ireland were also factors which led to his decision.

From the confined grazing system in Ireland, to an all-indoor unit in the USA and an all-grazing system in New Zealand, Mr Clinton said he is frequently asked which system is most profitable.

“Each country is different each year. But on a straight return investment, the midwest USA has the cheapest entry of cow, but requires the highest level of management and can be profitable. But farming in the USA is isolated, with no social or recreational activities locally,” he said.

But being able to build vast units like those seen in America would be impossible with the expensive land prices and quota availability a problem in Ireland, but “home is where the heart is” he added.

“New Zealand has a good climate and good grass growth at a low cost. The industry is well structured there is good labour, no need for sheds and no problems with slurry. But milk prices are volatile,” he said.

Mr Clinton said New Zealand was the most enjoyable place to farm, because of the farm size and structure, the grass management, and the ease with which cows get in calf and calve.