The final report of the Independent Scientific Group on cattle TB (News, 22 June) contained comments that extended beyond the remit of that originally given to the group, says junior DEFRA minister Lord Rooker.

Speaking to Farmers Weekly the minister said the ISG “offered opinion” beyond the scope of the taskpresented to it 10 years ago. He alsoexpressed frustration that the group failed to answer some of the questions considered central to furthering understanding of the disease.

Asked what the ISG’s report meant for future government policy, he said no decision could be made before the Environment, Food and Rural Affairs Select Committee of MPs published its report into bovine TB, expected to be in the autumn of this year.

“We need as much parliamentary consensus as possible. It will take time and I appreciate the difficulties this poses to industry stakeholders, but we need the EFRA report before we can move forward,” Lord Rooker said.

He also admitted to being concerned that affected farmers might consider taking illegal measures if the government appeared to be stalling on the issue. 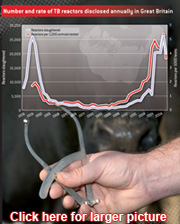 “We have a diseased wildlife population that’s on the move and a major food production animal with the same disease. As a government we cannot stand by and allow that situation to continue. We can’t sit back and do nothing we don’t want farmers to take the law into their own hands.”

“We now need government to tell us what measures are on the table. If culling is to be ruled out, we need to know if the moratorium on issuing licences is to be lifted, we need to know and under what circumstances would an application be considered.”

The NFU, he said, would now study the report, in particular its recommendations, re-cost the badger culling options outlined, and evaluate the costs to the industry of the extra cattle measures.

The Meat & Livestock Commission has also been approached about performing a macro-economic analysis of the effect in hotspot areas if beef and dairy farming were to fall dramatically.

The government can’t sit back and do nothing: Lord Rooker.