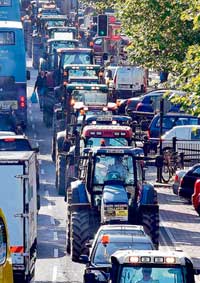 Thousands of farmers have taken part in protests across Ireland to highlight the devastating impact of falling farm incomes and government funding cuts.

About 6000 tractors were reportedly brought onto the streets of 29 towns and cities across the Republic yesterday (12 October), blocking roads and causing traffic disruption, particularly in Limerick and Kilkenny.

Irish Farmers Association president Padraig Walshe said the support for the “tractorcade” highlighted the anger felt by many farmers who faced a winter of cash shortages, while trying to provide for their families and keep businesses afloat.

The IFA predicted farm incomes would fall by up to 25% this year to an average of below €15,000 and a 35% fall was likely over the next two years.

“Government cuts on vital farm schemes are significantly contributing to this income fall,” Mr Walshe said. There must be a reversal of cuts to REPS (rural environment protection scheme) and disadvantaged areas payments, which are a vital support to farmers and the wider rural economy,” he added.

“Almost every town throughout rural Ireland is dependent on agriculture and the income collapse will lead to significant downturn in business across the rural economy. The Government must take immediate action to address this issue.”