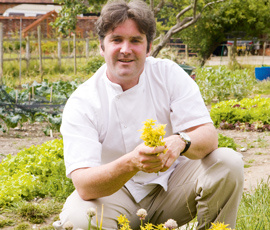 Top TV chef and restaurateur Mike Robinson is backing Farmers Weekly’s campaign to get more British food into our hospitals.

Mr Robinson, a co-presenter of ITV1’s primetime series Countrywise and Countrywise Kitchen, believes NHS food sourcing policies are “absolutely tragic” but are symptomatic of a “wider malaise” in the UK – the drive for cheap food.

“I think Farmers Weekly’s Get Better Get British campaign to get NHS hospitals to source more home-grown food is correct and essential,” he says. “The NHS could do a great deal better. We produce so much food great here in the UK there’s absolutely no reason at all to source anything from abroad.”

British farmers are producing an abundance of affordable, great food – and NHS bosses should source much more of it, he insists.

“I would imagine that the trusts that are sourcing frozen lamb instead of fresh home-grown lamb are doing so to save money,” he says. “But your campaign has shown that buying British doesn’t necessarily mean paying more. There is plenty of great, cheap food that is available and British.”

He adds: “I think it’s absolutely tragic that the collective bureaucracy of the NHS can allow this to go on. It’s an ongoing problem we suffer from in this country.”

NHS bosses in charge of the buying should be more adventurous in their food buying decisions, he reckons.

He believes the people doing the buying at the NHS need to be trained to develop a passion and understanding of food, but all too often, they opt for the safe choice and take the easy decision.

“We need to change the way people think and we also need to clamp down on the incredible health and safety and red tape culture that exists,” he says.

“It’s the fear of being pulled up for something that stops people from being adventurous. Middle management is terrified of being courageous.”

For example, the UK produces large quantities of pheasant and other game of “incredibly good value for money”.

“Game is nutritious, high in protein, low in fat and cholesterol, but full of anti-oxidants,” he says.

“It can be braised or stewed – the question is whether patients will eat it.”

Meanwhile, a large proportion of the UK’s catch of Scottish langoustine, hake and shellfish goes to other EU countries, including Spain and Portugal.

“They will pay for it and want it – because we don’t,” he says. “We have got to get over this cheap food culture in the UK. As long as it’s cheap, we don’t care.

“This ‘lovely’ food movement, which we are all part of, is really only appealing to a tiny percentage of the UK.”

More on the Get Better, Get British campaign