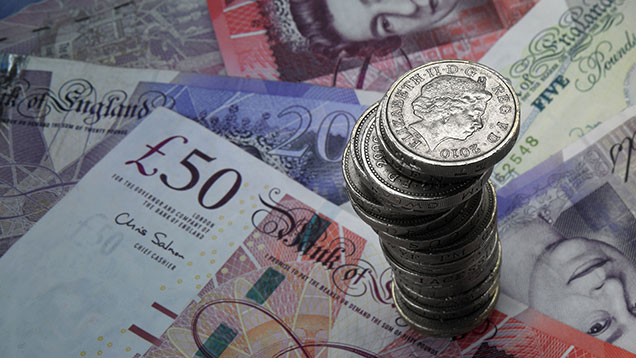 Farmers are heading for “troubled waters” when it comes to cashflow, as falling commodity prices and the strong pound continue to squeeze many farm businesses.

Consultants are warning that tough times are set to continue and some producers will struggle to make any margin over the coming months.

The latest version of the Agricultural Budgeting and Costings Book warns there is little immediate prospect of a turnaround in commodity prices.

The book suggests a cost of production for an 8.9t/ha winter feed wheat crop, before rent, finance and family labour, of £118.90/t. Family manual labour would add another £10.10/t to this.

If the UK five-year average wheat yield of 7.6t/ha is taken as a base, this suggests the cost rises to well over £130/t.

The book indicates milk producers could be facing a net profit of just 0.6p/litre, but this assumes they have been able to average a milk price of 25.6p/litre over the year.

Richard King, head of research at Andersons and the book’s editor, said the figures were averages so some people would be doing better, but others would be doing worse.

“Even in the current climate there are good farmers out there still making money,” he said.

“But the gap between the best and the rest keeps getting bigger.”

With more than 80% of the UK’s trade dependent on the EU, the strength of the pound was keeping domestic prices under pressure, said Mr King.

And while costs had dropped back, they were still not back to the levels of five years ago.

In the face of such pressure farmers had to focus on the factors they could control – how their businesses are set up and run, he said.

Cashflow management would be challenging for some – particularly if the basic payment did not arrive in December, he added. “We’re telling people to budget for March.”

Gail Soutar, NFU chief economics and international affairs adviser, said commodity prices had continued to fall across a range of products, for example cattle and pig prices were both back 7% on the start of the year.

“Cashflows are heading into troubled waters,” she said.

“We are seeing oil prices rising again and price inflation across a number of inputs such as fertilisers and pesticides.

This, along with the impact of a strong currency, doesn’t help the outlook.”

The Bank of England puts borrowing to farm businesses at £16.65bn, up 10% year to date, she added.

“Anecdotally we hear that this is for working capital, extension of overdrafts to support the farming activity.”

Ms Soutar said with pressure on cashflows set to increase in the months ahead it was vital BPS cash did go out in December.